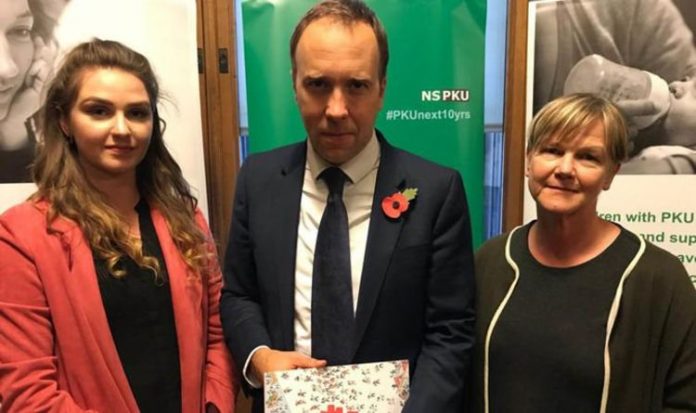 We are fighting for the NHS to end to the exhaustive wait for US firm BioMarin’s drug Kuvan, which would help sufferers eat more natural foods. Now Matt Hancock’s predecessor Jeremy Hunt has written to the boss of BioMarin Europe James Lennertz, exclusively shared with the Daily Express. Mr Hunt – the chairman of the Health and Social Care Select Committee – told us: “For far too long people have been denied the normal life most of us take for granted.

“Now we hope and pray 2021 will be not just the year we defeat Covid, but the year many families can get back their lives by accessing this vital drug.

“But the manufacturer Biomarin needs to be flexible on price.

“What is the point in medical breakthroughs if most people can’t afford to benefit from them?”

Over Christmas Holly, of Godalming, Surrey, delivered a box of a dozen PKU children’s Festive Wishes to BioMarin’s London HQ.

The kids begged BioMarin lower their prices so the NHS can buy it for the 600 sufferers who could benefit.

Little Stanley Brown, six, of Halesowen, West Midlands, said he is desperate for Kuvan so can stop drinking his synthetic protein drink.

The foul-tasting shake is packed full of amino acids that PKU sufferers can safely digest but smells and tastes almost fishy.

Holly told us: “I have lived with PKU as a child, an adolescent and now as an adult. I know what they go through at that young age.

“I really hope these beautiful little children do not have to live without Kuvan as I have had to do.”

In his strongly worded letter, Mr Hunt said: “It has been hugely disappointing to me this deal has still not been achieved.

“All pharmaceutical companies have an ethical responsibility to make sure their products are not just effective but also affordable.

“I would urge you to secure a deal with the NHS so Callum and Holly – and many others in England – can enjoy the normal life we take for granted.”

Since 2008 life-changing Kuvan, BioMarin’s brand name for sapropterin, has been available across Europe.

NHS drugs appraiser the National Institute for Health and Care Excellence (Nice) are again reviewing Kuvan, with a decision due in April.

Holly and Callum look at our coverage (Image: )

If BioMarin refuse to lower their price, campaigners urge NHSE to negotiate a deal with cheaper generic drug makers instead.

Labour MP for Blaydon, Liz Twist, told us: “Families need Kuvan now. This has to be an immediate health priority.”

NHSE told us: “The NHS has repeatedly urged BioMarin to offer the drug at a fair price, a cost-effective use of taxpayer money.”

In a reply to Mr Hunt – seen by the Daily Express – BioMarin have claimed they have made a “pricing proposal” that is both “fair and reasonable.”

However they say the reported 80 percent discount sought by NHS England for Kuvan was an offer they simply cannot accept.

BioMarin stressed to Mr Hunt they will “continue to be committed to trying to find a solution for patients with PKU in the UK.”

Caroline Graham will never stop fighting for BioMarin’s drug Kuvan – as it could dramatically help two of her children.

Mrs Graham, 55, has three children and two of them – architectural assistant Callum, 26, and music student Holly, 24 – have PKU.

In 2003 Mrs Graham and her husband wept tears of joy when told a gene mutation test proved Kuvan would massively help her two children.

The drug was licensed for use in the UK in 2008, yet 12 years on and the frustrated PKU community are still waiting for the life-changing medicine.

Mrs Graham, of Godalming, Surrey, told us: “I knew getting Kuvan may take the NHS a few years but I was so happy at the time a solution was on its way.

“Now here we are, almost 20 years after discovering my children would benefit from this treatment, still lobbying and campaigning.

“BioMarin blames the system, the system blames BioMarin’s price – and I do believe the cost of Kuvan is unreasonable.

“But you cannot escape the fact over the last 12 years while my children have been denied the medicine they desperately need, while BioMarin have made over $2billion profit.”

Mrs Graham, who lobbies the government and NHS on behalf of the UK PKU community, says that hundreds of children and adults have been “left without” vital treatment.

She told us: “Countries throughout Europe have all managed to get a deal for access to Kuvan yet the UK has been lagging behind.

“Keeping people with PKU safe on a daily basis is extremely difficult, knowing there is a treatment we cannot access because of money.

“There is no point having amazing modern new treatments for rare conditions if we cannot access them.”

They can’t break down phenylalanine, a component of protein.

In PKU, phenylalanine levels build up, it crosses into the brain causing irreversible damage and long-term health and learning issues.

Until recently, the only way to avoid the problems caused by PKU was for it to be diagnosed early and for children to have a low-protein diet and special supplements.

Even cans of diet drinks state they contain phenylalanine; this is specifically for PKU patients.

The drug sapropterin, under brand name Kuvan, enables PKU patients to break down phenylalanine – alleviating much of the condition.

This has been heart-breaking for families who know there is a treatment available to potentially change their lives but just out of reach.

Negotiations with BioMarin are ongoing and I hope the company will bow to pressure to reduce their price.

Funding of specialised medications is always going to be a problem due to finite funds in the healthcare system.

Yet if Kuvan’s cost was lowered, the lives of many people could be transformed.