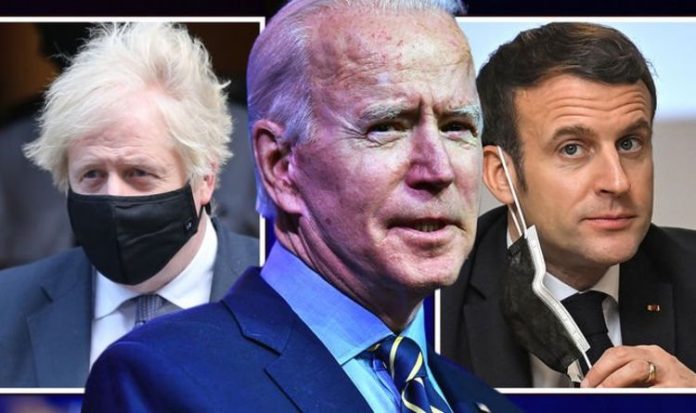 US President-elect Biden has long been a critic of Brexit, and has even clashed with the Prime Minister during negotiations with the EU. Mr Biden, who has Irish ancestry, fumed at Mr Johnson for his efforts to change the withdrawal agreement with the EU, including an attempt to modify the solution for the border in Ireland. The Democrat warned the UK that the Good Friday Agreement (designed to preserve peace on the Irish border) must “not become a casualty of Brexit”. The issue has been settled as Brussels and London reached a trade deal, but Brexit is still causing concern in Washington.

In 2016, Mr Biden said the UK leaving the EU would “diminish” US interest in London, while Secretary of State-designee Antony Blinken has called Brexit a “total mess”.

Another Biden ally, Charles Kupchan, who served as a senior National Security Council European affairs official in both the Obama and Clinton administrations, branded Brexit “an act of self-isolation that will inevitably diminish Britain’s weight in the world”.

A former senior American diplomat made a surprising prediction, that Mr Biden would turn to France and its president Emmanuel Macron for partnership.

They told Politico: “What will really irritate the UK is we will now return to engaging the EU as an essential partner, and it’s fair to see France as on the up.”

Ellen Laipson, director of George Mason University’s Centre for Security Policy Studies, added: “France is the one that still aspires to be a global actor and has more ambition.”

Many experts have also said that Mr Biden will look to Germany and Chancellor Angela Merkel as a key partner in Europe.

However, trade could be an area of dispute between Berlin and Washington, as highlighted by Andrew Kenningham, chief Europe economist at Capital Economics, who told CNBC in November that he “expects tension” between Mrs Merkel and Mr Biden.

He said: “I expect that there will still be some tensions over trade and economic policy between Germany and the US.

“The EU has plans to more strongly regulate and tax the mainly US tech firms such as Amazon and Google etc. And perennial trade disputes, for example between Boeing and Airbus are not going to go away.