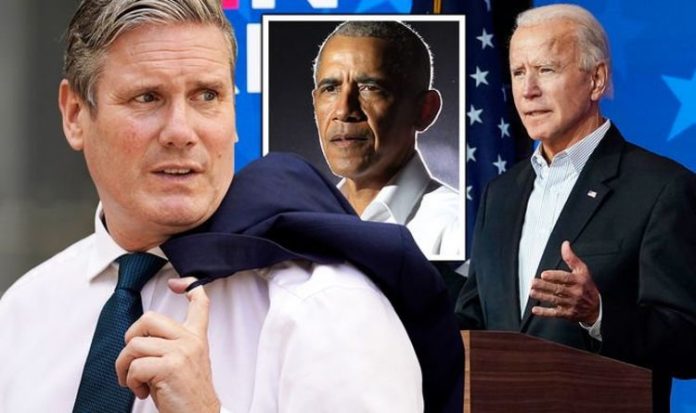 Since taking over the Labour Party in April, Sir Keir has been trying to move on from Brexit while distancing himself from previous leader Jeremy Corbyn’s far left. In June, Labour moderates dealt Corbynites a blow, as they installed David Evans, who worked for the party under Tony Blair, as general secretary. The appointment came after an already wide-ranging Shadow Cabinet reshuffle, which saw a string of Corbynite frontbenchers including John McDonnell, Diane Abbott and Richard Burgon, replaced with figures from the party’s soft-left.

Moreover, this month, Sir Keir extraordinarily suspended Mr Corbyn from the party after the former leader’s reaction to a report on antisemitism.

His efforts are already proving to be successful as, at the end of September, the Labour Party registered its first polling lead under Sir Keir.

The Opinium poll for the Observer newspaper put Labour on 42 percent, with the Conservatives on 39 percent.

To make things worse for Prime Minister Boris Johnson, the outcome of the US election could also complicate things.

He said: “I think the election of Biden will certainly help and strengthen Keir Starmer and the Labour Party in Britain.

“It is because they are in some respects trying to operate and travel on parallel tracks.

“I think he [Sir Keir] is prepared to make it absolutely clear that he is not going to be the competent face of Corbynism.

JUST IN: Johnson ‘to strike Brexit deal when US election result confirmed’

He noted: “Perhaps what it might do is show the gap between what a successful centre leader looks like – Joe Biden – and what we have in this country, Keir Starmer.

“The more voters learn about Starmer the less impressed they will be.”

Mr Biden has also taken a narrow lead over Mr Trump in Georgia, a state the US President must win to maintain a pathway to reelection and that no Democrat has carried since 1992.