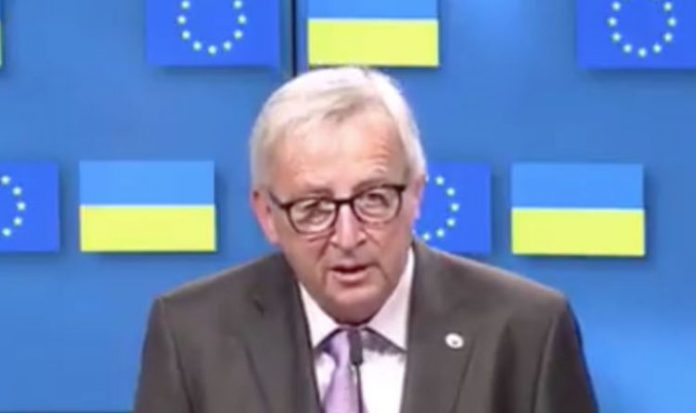 European Commission President said the decisions of Messrs Davis and Johnson had confirmed a unity previously not found in the Prime Minister’s divided Cabinet.

Mr Juncker said: “This clearly proves that at Chequers there was clearly a unity of views in the British Cabinet.”

The EU’s most senior official was giving a press conference alongside European Council President Donald Tusk and the Ukrainian leader Petro Poroshenko when the news broke.

Mr Tusk also vented similar frustrations, insisting politicians come and go but the British people must face the consequences of the decision they made in June 2016.

The Council President told reporters: “Politicians come and go but the problems they’ve created for their people remain.

“The mess caused by Brexit is the biggest problem in the history of UK-EU relations and it is still very far from being solved with or without Mr Davis.”

On the resignation of Mr Johnson, he added: “I can repeat what I said about Mr Davis.”

Brussels has seemingly been unfazed by resignations in the British Government, insisting they are ready to continue along the same negotiation timetable previously agreed.

Both Messrs Davis and Johnson have resigned from their roles after disagreeing with the Prime Minister’s proposal for a future relationship with the EU.

With Mr Johnson resigning shortly after 3pm, a Downing Street spokesman said: “This afternoon, the Prime Minister accepted the resignation of Boris Johnson as Foreign Secretary.

Dominic Raab, a former housing minister, has assumed the role of Brexit Secretary.

Brussels said they are ready to host Mr Raab next week for a round of negotiations as they continue to push forward to reach an agreement on the Brexit withdrawal agreement.