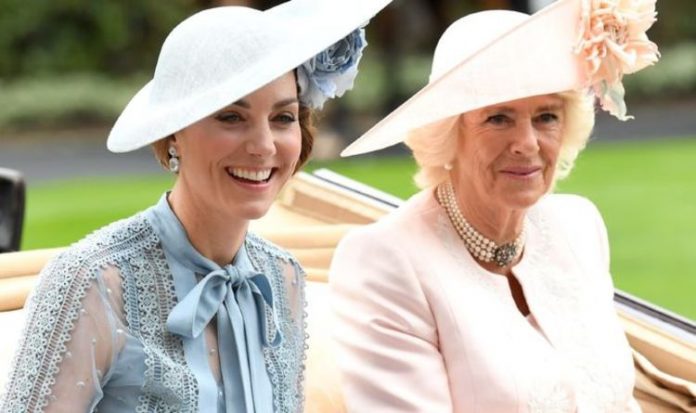 Kate, the Duchess of Cambridge and Camilla, the Duchess of Cornwall subject their husbands to mockery each year over the “ridiculous costumes” the royal men are forced to wear for a special ceremony. Prince William and Prince Charles are among those who join the Order of the Garter royal procession every year in June. Royal experts spoke to the ‘Secrets of the Royal Palaces’ documentary about the tradition.

Narrator Samantha Bond told viewers: “The rituals of this ancient order have been passed down through the generations.

“Every year on the traditional Garter Day, the Queen, Knights and Ladies process through Windsor Castle to St George’s Chapel.

“There they attend a special service.”

Mail on Sunday Royal Editor Emily Andrews added: “Its members of the Royal Family dressing up in the most ridiculous costumes with hats and feathers, processing down to Windsor Castle.”

She continued: “It is a picture opportunity for the wives mainly, like Camilla and Kate, to laugh at their husbands.

“I don’t think we really, as a nation, have much idea what it’s all about.

“For me, it always stirs up memories of the Da Vinci Code and Dan Brown.”

According to the documentary, little is known about the true origins of the order.

It was a mysterious brotherhood of knights that lives on to this day.

Art historian Jacky Klein told the documentary: “The Order of the Garter is the highest order of chivalry in England.

“In fact, it’s the oldest order anywhere in the world that’s been in continuous existence.

Cultural historian Dr Janina Ramirez said: “It’s a group of 24 people who are fiercely loyal and swear to protect the King and country.”