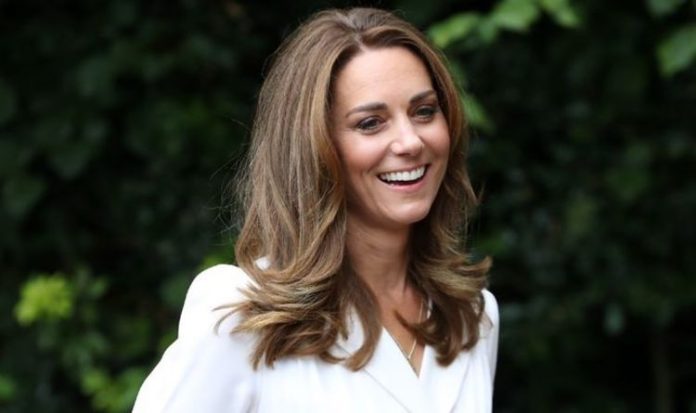 Fashion website Lyst has released its annual Year In Fashion report. Kate, 38, is the only member of the Royal Family to feature in its list of power dressers for 2020.

Prince William’s wife comes ninth in the list of 10 celebrity power dressers – which is based on searches, sales, news coverage and social media mentions.

Kate prompted a frenzy when she stepped out in a floral face mask in August.

Searches for similar coverings surged by 185 percent, according to Lyst.

And the mother-of-three sparked a 36 percent increase in searches for striped Breton tops after donning one for a BBC interview in April.

The Year In Fashion report also includes the biggest fashion moments for 2020, which features Meghan Markle and Princess Eugenie.

The Queen’s granddaughter wore a vintage gown and tiara – both loaned by the monarch.

The dress was designed by Sir Norman Hartnell in the 1960s.

The monarch wore the gown for a state dinner at the British Embassy in Rome during a visit in 1961, the world premiere of Lawrence Of Arabia at the Odeon Leicester Square in December 1962 and the State Opening of Parliament in 1966.

The dress was altered for Beatrice by the Queen’s personal adviser and dresser Angela Kelly and fashion designer Stewart Parvin.

It is made of peau de soie taffeta, with geometric hand embroidery in crystals and diamantes over the bodice, waist and hips, while the skirt is trimmed with a band of ivory Duchesse satin.

Searches for vintage wedding dresses jumped by a huge 297 percent in the 48 hours after Beatrice’s wedding to Edoardo Mapelli Mozzi, according to Lyst.

The fashion website analysed the searches of more than 100 million shoppers for its Year In Fashion report.