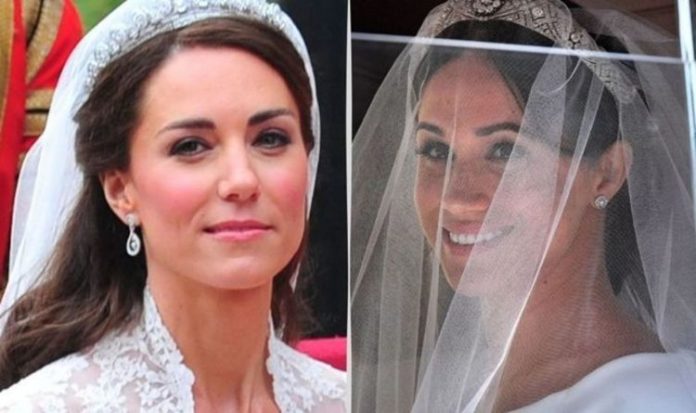 Royal weddings: Expert hits out at ‘scandalous’ cost for taxpayer

Chloe Savage, 43, said she is struggling to feed her two children months after her work dried up due to the pandemic. As the owner of a small business, said she has received no financial help from the Government and claimed her Universal Credit application has been rejected four times.

Due to the loss of projects, Ms Savage has been forced to shut her workshop in Bristol and is working from her mother’s garage.

She also said she is in £25,000 of debt with a Government bounce-back loan to bring the rental agreement on her workshop to an end.

Before COVID-19 hit earlier this year, things were going well for the mother-of-two.

She and her former apprentices – whom she has had to lay off – worked on costumes for theatres, museums and film studios.

The gifted embroiderer also made pieces which were used by the Harry Potter franchise.

In an interview with day Times, Ms Savage said the amount of money she has left in her bank account will cover only one month’s rent on her home in Warmley village, seven miles outside Bristol.

She also said it is heartbreaking for her to have to admit that she cannot afford to feed her eight-year-old son and 14-year-old daughter.

She said: “My daughter has started avoiding eating lunch and supper because she thinks it will save me money on the food bill. I’m heartbroken.”

She hit out at Boris Johnson’s Government for boasting about the importance of small business to the economy’s post-Covid recovery.

She added: “Why is the government persecuting small-business owners?

“It keeps going on about us being the backbone of the recovery, but we won’t be there to recover in a few months.”

Ms Savage was introduced to the Duchess of Cambridge when she was making her wedding dress in the run up to her big day in 2011.

DON’T MISS
Royal tour: What is the Royal Train? William and Kate granted honour [EXPLAINED]
William and Kate to use Queen’s train together for first time on tour [ANALSYIS]
Kate Middleton’s brother James open up on depression battle [INSIGHT]

Meghan beams as she waves to the crowds (Image: GETTY)

Kate and William pictured at their April 2011 wedding (Image: GETTY)

She learned her top-class skills at the prestigious Ecole Lesage in Paris and the Royal School of Needlework at Hampton Court Palace.

Her needlework on Kate’s gown involved the tedious task of cutting flowers from lace and sewing them onto ivory silk tulle.

The duchess’ Alexander McQueen dress, designed by Sarah Burton, was dubbed one of the most iconic royal wedding dresses of all time.

And seven years later Ms Savage was again call on for her expertise when the Duchess of Sussex was preparing to marrying Prince Harry.

She told the attendees, which included Manchester Mayor Andy Burnham, that the Government simply did not understand the impact of financial worries on individuals.

She said: “In March we lost two years’ worth of planned work in 24 hours.

“We have had no income since March and unfortunately we still don’t know when some of our work will come back.

“The stress is horrendous. We’ve got rent we don’t know how to pay, we’ve got bills due. We just don’t know when we’re going.”

She added: “The Government does not understand the stress they are not only putting on the parents but some of the children too.”