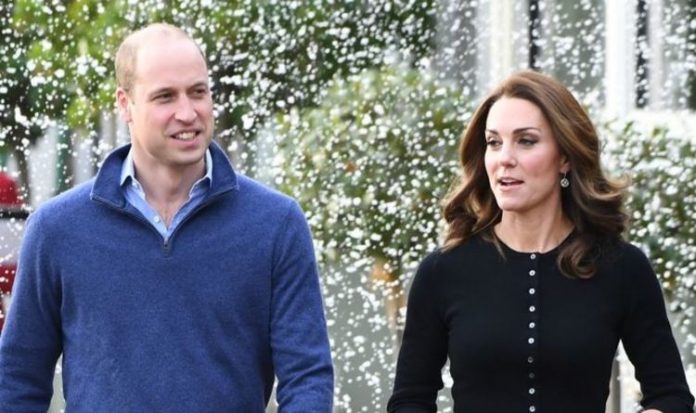 The Duke and Duchess of Cambridge have been staying at Anmer Hall in Norfolk during the coronavirus lockdown. But due to London’s recent downpour of snow, the royal couple’s main house Kensington Palace has had a new magical winter look.

The caption read: “Brrr! Queen Victoria looks like she could do with a big pair of knitted mittens.

“Thanks to robjdphotos on Twitter for sharing this fantastic #PalacePhoto of #KensingtonPalace in the snow this morning.”

The charity looks after Kensington Palace and Hampton Court Palace as well as other historic buildings.

The picture shows Kensington Palace and the Queen Victoria statue covered in snow.

The statue was sculpted by Queen Victoria’s fourth daughter Princess Louise and erected in 1893.

Social media users were stunned by the magical new view of the royal palace.

One user wrote: “How stunning! Thank you for sharing.”

While another fan posted: “This is a lovely picture of Queen Victoria covered in fresh fallen snow.”

The Duke and Duchess of Cambridge use Apartment 1A in Kensington Palace as their main base.

However, due to the ongoing coronavirus pandemic, Kate and William have been staying at their second home Anmer Hall in Norfolk.

Apartment 1A was previously the home of the Queen’s sister Princess Margaret.

It is a four-storey apartment with 20 rooms including five receptions, three main bedrooms and nurseries.

Coronavirus restrictions have forced the Royal Family to conduct some of their engagements via video or phone calls.

During the first lockdown, Kate showed off her book collection inside Kensington Palace.

The Duchess was pictured supporting a Public Health England initiative in March last year to boost the nation’s mental health in the early days of the pandemic.

She delighted royal fans with her collection of Penguin Clothbound Classics which were each individually designed by Corlie Bickford-Smith.