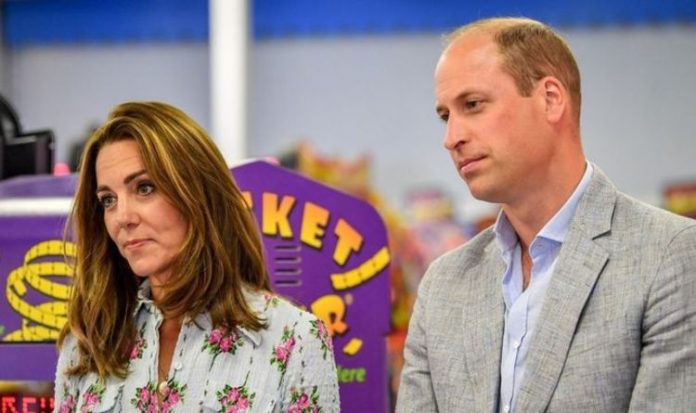 On Friday, Buckingham Palace confirmed that the Duke and Duchess of Sussex will not be returning as working members of the Royal Family. The Queen confirmed they would not “continue with the responsibilities and duties that come with a life of public service”.

Sky News appeared to make a rather embarrassing blunder which viewers were quick to spot.

In a breaking news banner, which has since been corrected, the broadcaster said: “Buckingham Palace: Duke and Duchess of Cambridge will not return as working members of the Royal family.”

The correct name, of course, is the Duke and Duchess of Sussex. Twitter users were hot on its heels.

One observer posted a picture of the blunder, writing: “@skynews #skynews got this wrong. It’s Sussex. Not Cambridge.”

Another tweeted: “Sky News getting Cambridge and Sussex the wrong way round just now is kind of amusing.”

“How you can confuse Cambridge with Sussex is beyond me. Only just corrected. Bad.”

A third user posted: “I’m not sure you know your Sussex from your Cambridge @SkyNews.”

The Palace added: “Following conversations with The Duke, The Queen has written confirming that in stepping away from the work of The Royal Family it is not possible to continue with the responsibilities and duties that come with a life of public service.

Meghan and Harry shocked the nation last year when they decided to step down as senior working members of the Royal Family.

As part of their deal with the Queen, the Sussexes agreed to have a 12-month review with the Palace which was expected to be held in March.

But now it has been confirmed Meghan and Harry, who have settled down in the US, will not be returning to their royal duties.

Royal commentators suggested that the Sussexes were not expecting to lose their patronages.

A spokesperson for the Sussexes said on Friday: “As evidenced by their work over the past year, the Duke and Duchess of Sussex remain committed to their duty and service to the UK and around the world, and have offered their continued support to the organisations they have represented regardless of official role.”

In response to the Sussexes’ statement, Daily Express royal correspondent Richard Palmer tweeted: “The Queen believes you can’t be half in and half out. A slightly different perspective from the Sussexes.”

While the Telegraph’s royal editor Camilla Tominey claimed that Harry and Meghan “do not seem to understand what public service actually is”.