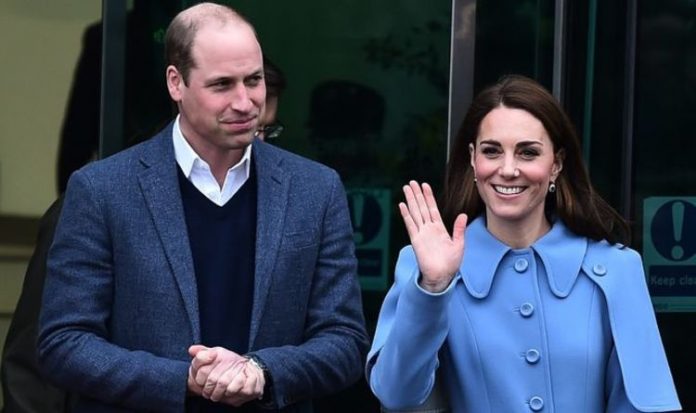 The Duke and Duchess of Cambridge most recently released a family snap from their 2020 Christmas card. And eagle-eyed royal fans may have noticed a theme in many of William and Kate’s photos.

At least one of the Cambridges tends to wear the colour blue in the pictures they share.

In this year’s Christmas card, Prince Louis is dressed in a smart navy jumper while William is wearing a shirt in a similar shade.

Kate cuts a casual figure in dark blue jeans and Princess Charlotte also sports a pair of leggings in the same colour.

The Cambridges have worn blue in many of their Christmas cards in recent years.

And in snaps released for little Louis’ second birthday in April, the young royal wore a checked blue shirt.

William also donned blue, as did Charlotte and Louis, in a photo to mark his 38th birthday in June.

In their 2020 Christmas card – which was taken at Anmer Hall in Norfolk – William, 38, Kate, 38, Prince George, seven, Charlotte, five, and two-year-old Louis sit on a bale of hay with a large woodpile in the background.

The family-of-five smile as they pose for the camera.

READ MORE: Royal secret: Inside life at Anmer Hall with Kate and William

Last month, Kate thanked those who took part in her Hold Still initiative as the final 100 pictures were chosen out of more than 31,000 entries.

She said: “I just wanted to say a huge thank you to everyone who submitted an image to Hold Still.

“I launched the project with the National Portrait Gallery back in May because I wanted to find a way to allow everyone to share their stories and experiences of lockdown.

“We have been thrilled by the response to the project and I couldn’t be more grateful to each and every one of the 31,000 people who submitted an image.

“It was so hard to select the final 100 photographs, but we hope we have created a collective portrait of our nation, reflecting on what others have experienced as well as our own journeys through this difficult time.

“It has been fantastic to see these portraits on billboards and outdoor poster sites across the country as part of our community exhibition, and I’m hugely grateful to all our partners for helping us take the images back to the people and communities who took them.

“For me, the most powerful part of the project is that it has shown just how much people and communities have come together and how important we all are to each other.

“Thank you so much for being part of Hold Still and for sharing your stories with the nation.“