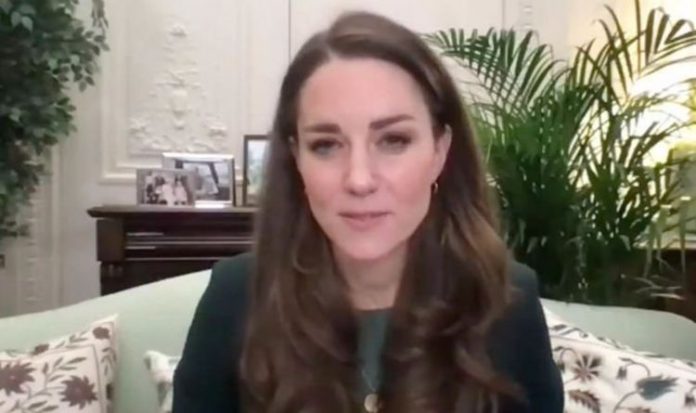 Kate joined a video call with parents of children attending Roe Green Junior School in Kingsbury, north-west London. During this virtual engagement, Kate took part in a show-and-tell exercise led by headteacher Melissa Loosemore, which aimed at starting a conversation among the parents on the challenges of lockdown and homeschooling.

During the call, which took place on Tuesday but was released by Kensington Palace yesterday evening, Kate said she felt “pulled in so many different directions” after being forced to quickly learn how to be a teacher and even a hairdresser.

Ms Loosemore asked the parents to write down on a piece of paper “one word that describes parenting during this pandemic”.

Kate, after she chose “exhausting”, was asked to elaborate on her sentiment.

Another parent taking part in the call, Nicole Seidemann, agreed with the Duchess of Cambridge’s comments.

Ms Seidemann said she was “definitely a full-time teacher right now and struggling to do much else”.

Kate and Prince William had already opened up in April about homeschooling and being a parent during lockdown in a candid interview with the BBC.

Then, after only a few weeks of homeschooling, Kate said they had faced “ups and downs” like “lots of families”.

Becoming the teachers of their three children, she added, had been “challenging” but they had kept a strict routine.

This school, one royal expert has said, “expects a hands-on approach” from parents – which Kate and William favour.

“Thomas’s Battersea expects a hands-on approach from parents, that’s part of the reason they picked it.

“George and Charlotte are studious and love to learn, so they are pretty self-sufficient when it comes to Zoom learning.

“But the school likes the children to do practical projects too.”

In 2020, Kate provided an example of the practical projects her children are expected to do – and how it created a bit of turmoil in her household.

Appearing on ITV’s This Morning, Kate said her eldest son was jealous of Charlotte’s schoolwork.

She revealed: “George gets very upset because he wants to do Charlotte’s projects.