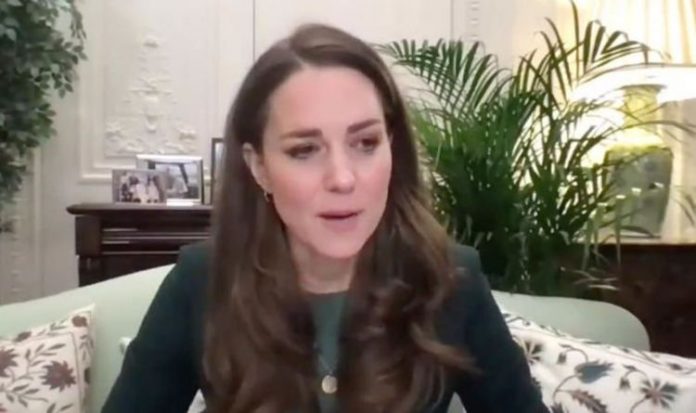 The Duchess’ honesty was not well received by all, with many criticising Kate for speaking out about the challenges she has encountered over the past 10 months.

Among them, Graham Smith, the CEO of Republic, a group campaigning in favour of an elected head of state, lashed out at the Duchess’ description of her life as a parent on lockdown, branding it “out of touch patronising nonsense”.

“The royals have dozens of people working for each one of them.

Kate Middleton news: Kate opened up on parenting during the pandemic during a video call with other parents (Image: KENSINGTON ROYAL/TWITTER)

“They don’t need to worry about going to work, about whether they’ll still have a job or how they can afford books or computers for homeschooling.”

This sentiment was shared by other social media users, with one saying: “Kate is exhausted from taking care of her children with the help of nanny…

“It shows us how royalty is useless and unnecessary. #abolishthemonarchy”

Other Twitter users appeared to suggest Kate should not complain about having added responsibilities as a result of national lockdowns because the Cambridges can count on the help of a nanny – Maria Teresa Turrion Borrallo.

Kate Middleton news: Kate spoke about the challenges she has encountered as a parent during the lockdown (Image: KENSINGTON ROYAL/TWITTER)

One social media user wrote: “Kate who has a nanny, staff, stay at home husband for now, huge house and garden without a single worry about where the money comes from that Kate is now once again complaining?”

Another said: “She should just stop. She has no clue. An indoor nanny, huge house, outdoor space.

“Every parent struggles for sure but she has no clue about the real struggles at all.

A third added: “Such a shame she’s having to resort to doing things the peasants have been doing for generations! Must be a real nightmare for the royals!”

Another social media user said: “Exhausted? Ha! Tell her to homeschool her eldest kids whilst looking after her toddler who may keep her up the night before WITHOUT help from the nannies then she can truly say she’s exhausted”.

And another Twitter user, self-described as a fan of the Duke and Duchess of Sussex, said: “Exhausted? Really? Wonder what the reaction would be if it had been uttered by Meghan? I’ll wait.”

Kate’s description of parenting during the pandemic, however, appears to have hit close to home to many other social media users.

One said: “Small children are indeed exhausting. I feel you, Kate.

“We know the Cambridges are hands-on parents, doing the home-schooling themselves, etc.

“The kids aren’t left with nannies. Parenting struggles are universal.”

Another showed appreciation for Kate’s honesty, saying: “Such honest responses from her – genuine participation.”

And a third added: “Kate is right. True for all parents”.

During the call, Kate was asked to elaborate on why she thinks parenting on lockdown has been exhausting.

Kate, who has focused her royal work during the pandemic on supporting the NHS, launching her Early Years project and continuing a conversation on children and adults’ mental health, had already described homeschooling as “challenging” during the first national lockdown in April.