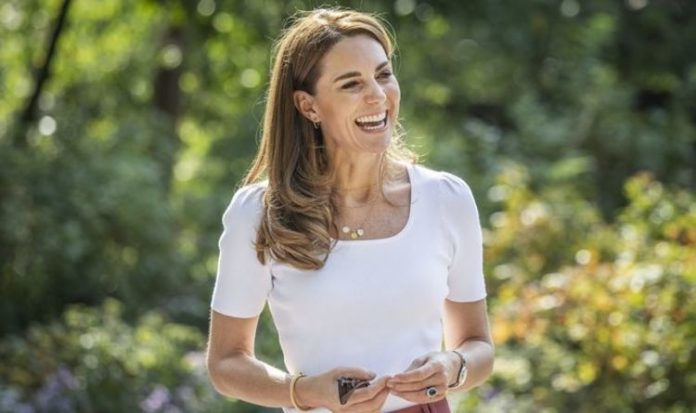 It was passed on to Prince Harry, who then offered it to his brother so that William could propose to Kate.

A study of 2,000 adults commissioned by the Natural Diamond Council found that this ring was considered most popular, taking around 20 percent of the vote.

Meghan Markle’s engagement ring, on the other hand, came in second with 18 percent.

Prince Harry designed the ring himself, choosing a centre diamond from Botswana.

This is surrounded by two round diamonds which were chosen from his mother Princess Diana’s personal jewellery collection.

Lisa Levinson from the Natural Diamond Council said Kate’s ring is “instantly recognisable” with the white diamonds contrasting with the blue sapphire.

Sapphire soon became much more sought-after – a phenomenon which repeated itself when Prince William and Kate Middleton announced their engagement in 2010.

The Duchess has also been seen wearing other items of jewellery to match her engagement ring.

William and Kate married in April 2011 at a ceremony in Westminster Abbey.

Meghan and Harry got married in May 2018. Their ceremony took place at St George’s Chapel at Windsor Castle.

Although Kate’s ring proved most popular in the study, another fashion survey this month crowned Meghan as having produced the top “royal fashion moment of 2020”.

While the diamond survey suggested the two royal couples are particularly influential in jewellery circles, non-royals were also featured.

A diamond ring belonging to US musician Miley Cyrus came in third place.

This was followed by an oval-diamond ring belonging to Hailey Bieber, a US model and wife of pop giant Justin Bieber.

Musician Beyoncé also featured. Her emerald-cut ring proved popular on the survey, and reportedly was worth around $5 million when it was bought in 2008.

The survey also revealed details about where people were getting their rings from.

Private jewellers were revealed to be the most popular source, while high-street stores and high-end brands followed.