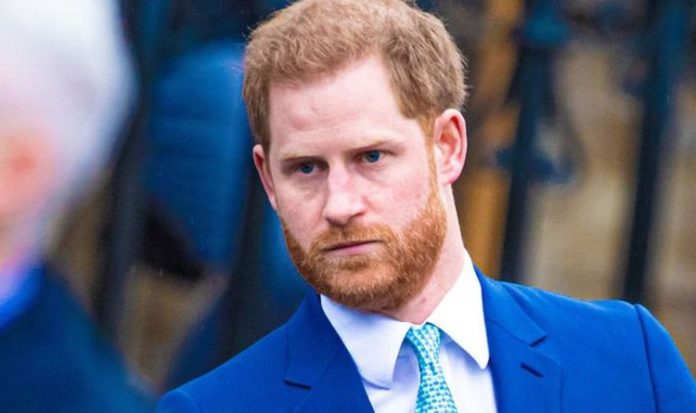 The Duke of Sussex voiced his support for the proposed streaming service, which will broadcast documentaries on environmental issues and climate crises. Harry has been an outspoken advocate for environmental issues throughout his time as a royal, being patron to numerous conservation charities. His father Prince Charles has also regularly touted climate change as the biggest issue facing the planet.

Harry, speaking as head of conservation group Africa Parks, backed WaterBear in an interview for the streaming platform.

He said: “For me it’s about putting the do’s behind the say’s, and that is something that WaterBear is going to be doing: capitalising on a community of doers.

“There’s a lot of people that say, but this is about action.”

READ MORE: Harry and Meghan ‘in bed with Netflix’ as Sussexes’ hands tied after ‘astronomical’ deal

The Independent also reported that Harry shared his thoughts on the coronavirus pandemic and its impact on the environment.

Harry made the remarks on climate change and the environment to Ellen Windemuth, WaterBear chief executive, and Sam Sutaria, head of strategy.

The discussion will air on the streaming service from today, with Ms Windemuth praising the Duke for his support.

She said: “It’s an honour to partner with African Parks and Prince Harry, whose hands-on passion for conservation and the environment has the ability to move the masses.

“This is a unifying moment for our planet, and WaterBear is proud to amplify the work we can collectively achieve.”

Earlier this year, Harry also opened up on how his son Archie has motivated him to make the world a better place.

The Duke made the reveal in the 2019 annual review for African Parks, and said: “Since becoming a father, I feel the pressure is even greater to ensure we can give our children the future they deserve, a future that hasn’t been taken from them, and a future full of possibility and opportunity.

“I want us all to be able to tell our children that yes, we saw this coming, and with the determination and help from an extraordinary group of committed individuals, we did what was needed to restore these essential ecosystems.”

In the review Harry also paid reference to the coronavirus pandemic, and suggested “the virus’ origins may be linked to our exploitation of nature”.

The Prince’s support for the streaming service comes after Netlix series The Crown faced major backlash over the portrayal of the Royal Family.

Most recently Royal commentator Russell Myers and TalkRadio host Kevin O’Sullivan agreed Netflix is enjoying the publicity due to the controversy on their Royal Family drama The Crown.

While on Talkradio, Mr O’Sullivan dubbed Netflix cowards as he argued the streaming giant is aware the Royal Family is unlikely to hit back with legal action.

He said the royals were bound by protocol to not engage with significant criticism or mockery.