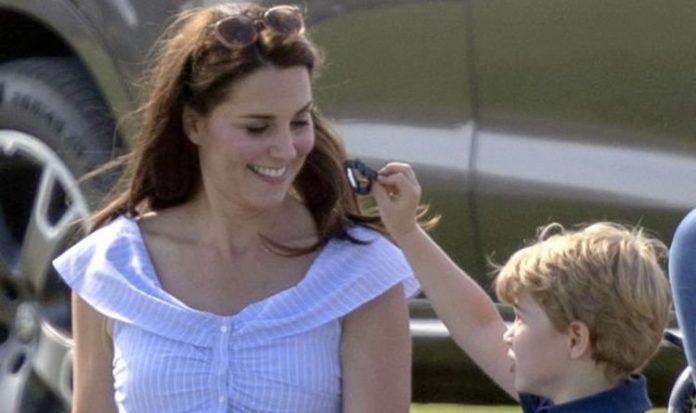 The doting mother-of-tree revealed what her son is studying at school when she spoke to one of her entrants from her photography competition Hold Still. The Duchess of Cambridge showed off her caring side when she called to speak to Ceri Edwards’ daughter, Poppy, who is in the same school year as Prince George, 7.

Ms Edwards’ photo ‘Be Safe Daddy X’ of her daughter cuddling her father, who is a paramedic, before he left to go out on a night shift during the coronavirus pandemic was of the final 100 images to be showcased at the National Portrait Gallery’s digital exhibition.

Kate is said to have put Poppy at “ease” by asking the youngster about her favourite subjects at school.

It was then during the surprise phone call that she opened up about her future king son.

Ms Edwards told Hello magazine: “The Duchess thanked us for our photograph and said how it resonated with her and the other judges and showed not only the special bond between father and daughter, but real emotion of the time.

“The Duchess was so down-to-earth and was so wonderful with Poppy.

“We talked about Poppy and Prince George being in the same school year and their current school topics – Poppy’s is Brazil and Beyond and George’s is The Active World – Volcanoes.

“She asked Poppy how she felt when her daddy had to go to work during the pandemic and Poppy said that she was very scared and worried about him, but very proud too.

“They talked about how important cuddles are and how they both love to give them.

“The Duchess also spoke to my husband about how things were for him as a paramedic during the height of the pandemic.”

Kate, 38, launched a digital exhibition of photographs taken during the coronavirus pandemic. The Queen has praised how many images captured the “resilience” of the British people.

Over 31,000 people responded by submitting their own entries. Entrants varied in age from four to 75 years old.

In a statement, the Queen said: “It was with great pleasure that I had the opportunity to look through a number of the portraits that made the final 100 images for the Hold Still photography project.

“The Duchess of Cambridge and I were inspired to see how the photographs have captured the resilience of the British people at such a challenging time, whether that is through celebrating frontline workers, recognising community spirit or showing the efforts of individuals supporting those in need.”

The project is part of the National Gallery which Kate is a patron of.