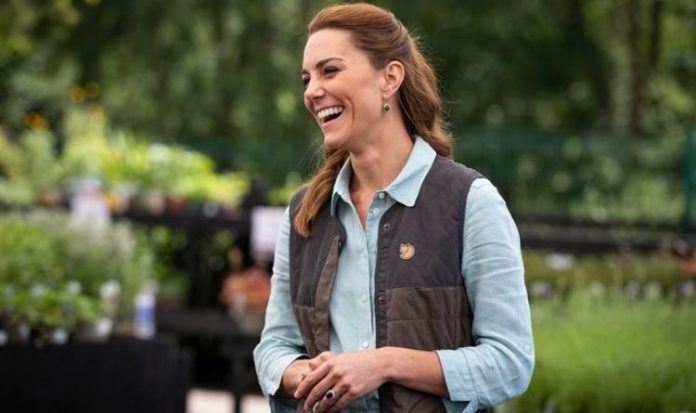 The Duchess, along with husband Prince William and children George, Charlotte, and Louis, have spent the past several months in their Anmer Hall home in Norfolk. After spending time isolating away from the coronavirus pandemic, the family are now venturing out together.

According to royal fans, the Cambridges were seen in Marble’s Paint Pot – a pottery painting shop also in Norfolk.

“Kate and the children must have painted some adorable pieces!”

The pot painting and ceramic craft centre says it offers painting activity for people of all ages.

It is not known exactly what the Duchess or the children painted, though it is possible the family painted mugs, plates, bowls or jugs from the shop’s crockery range.

The royal group could also have created a hand-painted frame or brought in an object of their own to personalise with paint.

The shop also doubles up as a traditional sweet shop – stored in glass jars and served in paper bags.

William and Kate are known to be hands-on parents, with the Duchess previously revealing family activities include pitching tents and baking.

“It’s been an interesting few months. I’ve learned my patience is a lot shorter than I thought it was!

“That’s probably the biggest eye-opener for me, and my wife has super patience.”

The Duke has also taken his two eldest children – George and Charlotte – to a football game in the past.

The three royals went to a Norwich versus Aston Villa game at Carrow Road in October last year.

Prince William said he had tried to slip into the game quietly to avoid attracting any attention – but the camera picked them up.

However, he was happy to report Aston Villa – the team he supports – beat Norwich comfortably. He said: “Best game of Villa’s season! It ended 5-1.”

Royal analysts have said the Cambridges are expected to head to Balmoral at some point this month.

The Scottish royal estate is currently where the Queen and Prince Philip are spending their annual holiday.

This is despite concerns earlier this month the area could be affected by local lockdown measures to curb the spread of coronavirus in Scotland.