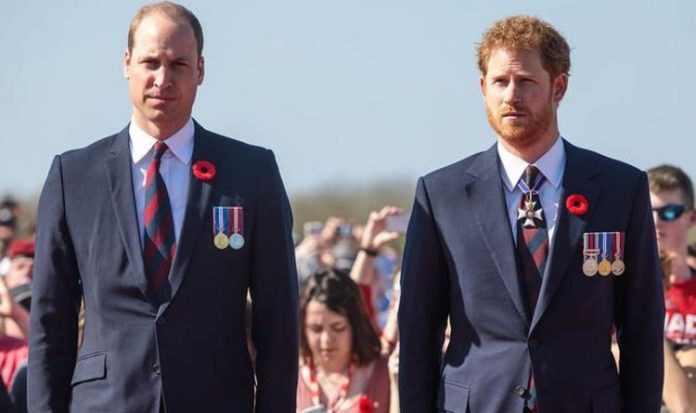 Prince William’s fallout with Prince Harry took place a few months into the Duke of Sussex’s relationship with Meghan Markle, royal author Robert Lacey wrote. The elder brother questioned Harry whether it would be the case to slow down the pace at which he was moving with the then-actress out of fear she would not be able to adjust, the expert added.

And the Duke of Cambridge had his own love story with Kate to use as an example of caution when it came to royal relationships and how to introduce an outsider to the protocols dictating the day-to-day life at the palace, according to Mr Lacey.

The expert wrote in his upcoming book Battle of Brothers: “William couldn’t understand how Harry could contemplate marrying this still unknown and untested quantity less than two years after their first meeting.

“It went against his every instinct – and his own track record.

“If ‘Waity William’ had taken a decade to test out and approve his life partner, surely his younger brother could ponder his options for just a year or so more?

“But ‘Waity William’, of course, took so long to commit to Kate for the sake of the monarchy.

“He had been auditioning her for a job all those years.

“So Harry could not help but wonder whether Wills was really concerned about his personal happiness – or whether he was, once again, and as per usual, thinking about the make-up and fortunes of ‘the Firm’ whose boss he would become one day?”

READ MORE: Kate made a secret London outing this week

The pair remained friends for months and even moved in together with other students before they started dating.

Their relationship became public knowledge only in 2004, when they were photographed on a ski vacation together.

Kate and William’s relationship cooled and the split up in 2007.

However, they are believed to have got back together within months, as Kate was photographed attending the Concert for Diana that summer.

Speaking about the break up in 2010, when they announced their engagement, the Duke of Cambridge said: “We were both very young. We were both defining ourselves as such and being different characters.

“It was very much trying to find our way and we were growing up, it was just a bit of space – things worked out for the better.”

Harry’s relationship with Meghan, which started with a blind date in the summer of 2016, had been welcomed by both Prince Charles and the Queen, Mr Lacey wrote.

One source reported in his book said the monarch was even “delighted to see Harry in a loving relationship”.

William was also approving of Meghan, the author added, writing: “Wills said that he loved Meghan personally – as did his wife Catherine.”

But, he added: “William worried that his brother was moving too fast in his courtship – and he did not shrink from saying as much when Harry started talking about getting hitched to Meghan quite soon.”

William, a source claimed, asked his brother: “This all seems to be moving rather quickly, are you sure?”

Prince Harry and Meghan eventually announced their engagement in November 2017, more than a year after their first meeting.

On their wedding day, Prince William was Harry’s best man – just like the younger brother had been for the Duke of Cambridge when he tied the know with Kate in 2011.