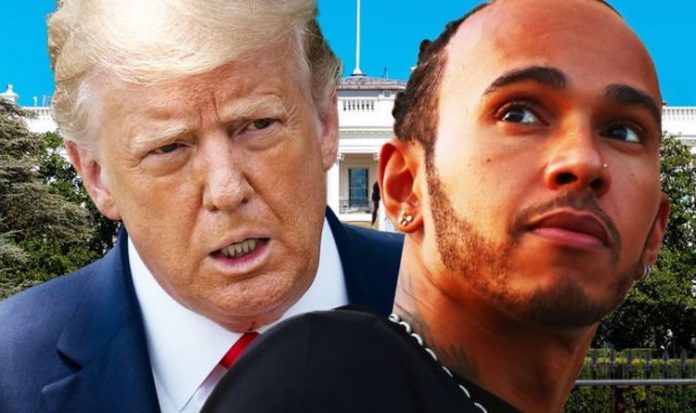 President Trump is languishing in the polls as his Democrat opponent, Joe Biden, looks poised to take the White House. Mr Biden has been ahead of Mr Trump in most national polls since the start of the year, and hovered around 50 percent in recent months while boasting a 10-point lead on occasions. The BBC’s poll of polls puts the former Vice President on 52 percent while the President sits on 42 percent. The election is sure to spark political interventions from celebrities and sports stars.

Formula One champion, Lewis Hamilton, has been a frequent critic of President Trump.

He took a brutal swipe at the Republican candidate, appearing to hint at Mr Trump “groping women” in an explosive interview.

The Mercedes star was asked about Mr Trump after his victory in the 2016 campaign, and said he much preferred his predecessor – Barack Obama.

Mr Hamilton said: “It’s such a huge contrast, when you’re a politician like Barack Obama, who’s a really good family guy, he never groped a women, or said anything derogatory about women.

“He’s someone I can personally look up to. If I had a kid, I could be comfortable that my kid is going to look at that guy and benefit. I can’t say that would be the case with Trump.”

During the 2016 campaign, The Washington Post published a video and accompanying article about then-presidential candidate Trump and television host Billy Bush having “an extremely lewd conversation about women” in 2005.

Mr Trump and Mr Bush were in a bus on their way to film an episode of Access Hollywood when the Republican candidate described his attempt to seduce a married woman.

READ  UK coronavirus panic as R rate could have soared to 1.8 after local outbreaks in region | UK | News (Reports)

In 2017, Mr Hamilton was at the Malaysian Grand Prix when he hit out at President Trump once more.

In the US, NFL (American Football) stars had taken the knee during their countries’ national anthem in protest of racial injustice and police brutality.

He said: “This is a very controversial and polarising story. I wouldn’t want to get involved in politics.

“Lewis’ feelings about human rights are very strong and I think he wanted to show that and probably Instagram as the communication channel is something that he needs to rethink. But I can relate to his feelings.

“I think one of the most important things in the US is that you have the right to express your opinion and I would want to leave it there.”

Lord Peter Hain – who has called for the F1 driver to be knighted – told Express.co.uk earlier this year that Mr Hamilton has proved why sports stars should speak out on issues outside of the sport.

He added: “He is a Briton to be proud of and is a role model for other sports people of any colour.

“I think it’s good that Raheem Sterling and Marcus Rashford have been vocal, Megan Rapinoe is another example.