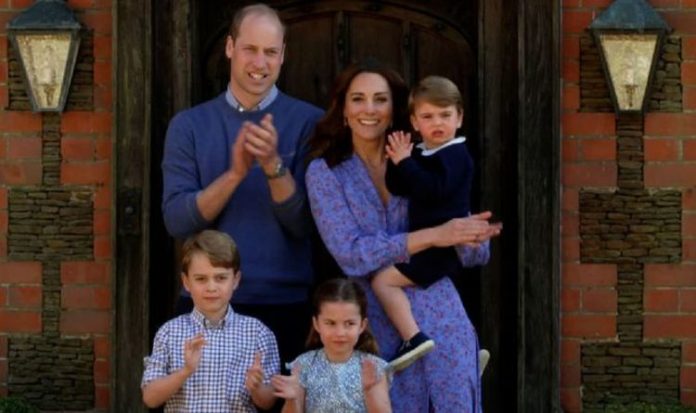 The original event took place every Thursday during the first lockdown. Millions of Brits showed their support for key workers by taking to their doorsteps at 8pm, clapping and banging pots. Kate and William’s children were no exception and cheerfully took part in the national show of force.

The Duke and Duchess of Cambridge decided in March last year to upload a clip to social media of Prince George, Princess Charlotte and Prince Louis doing their country proud.

The three little children can be seen clapping with vigour and enthusiasm, while breaking out into giggles.

Eagle-eyed Royal fans were quick to spot a curious detail about Charlotte and Louis’s outfits.

They noticed that Charlotte was wearing a striped top and jeans which matched the same outfit worn by her mother at the Gigaset Charity Polo Match in July 2015.

Likewise, little Louis, sporting a patterned blue bottom-up and navy sweater, was dressed identically to Prince William, when he and Kate announced their first royal pregnancy in 2012.

At the time the video was posted, royal fans were quick to praise the Cambridge family.

William and Kate have spent most of the current lockdown at their Anmer Hall home at Sandringham in Norfolk.

Like other parents around the country, they have been busy home schooling their children.