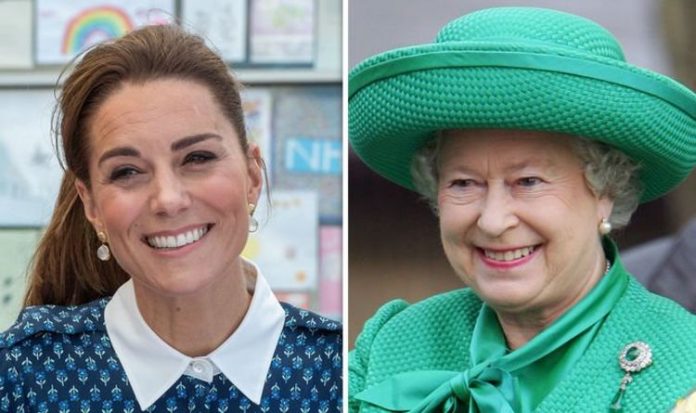 The Duke and Duchess of Cambridge are said to have had “a good lockdown”, as they have made a renewed effort to bring the nation together during the challenging times. Kate in particular has been praised for reforming her approach to royal life in the past year, as she prepares herself to one day become queen consort. She has started to emulate her grandmother-in-law, the Queen, with royal experts spotting some unusual traits which she and the monarch share.

Journalist Eleanor Steafel explained in December that Kate often works behind the scenes, away from the spotlight — and is subsequently ”beginning to be likened to the Queen in royal circles”.

Sources told The Telegraph that she is becoming a “universally popular figure” — like the sovereign.

They continued: “A stalwart and an English rose who reminds them of the Queen in the sense that she remains quite elusive, we don’t hear much from her.

“That’s why she’s the future.”

While royal author Victoria Murphy told Yahoo News last month that Kate was still “more of a team player than leader”, but had grown in confidence during her time on the royal frontline.

She added that Kate has “quiet self-assurance” which would come to “suit her future role” as queen.

Ms Murphy continued: “I’ve always thought that Kate has more in common personality-wise with the Queen; not an extrovert but quietly self-assured with a love of the outdoors and the ability to compartmentalise.”

Royal author Angela Levin pointed out: “Now she knows the ropes she is more relaxed.

READ MORE: How Meghan actually ‘fitted in straight away’ with Kate and William

Charles, Prince Andrew and Princess Anne’s marriages all broke down very publicly in the Nineties.

The Prince of Wales, in particular, came under scrutiny after Princess Diana revealed the depth of her unhappiness in her marriage in 1995 during her bombshell BBC Panorama interview.

Charles’ has been criticised for his overt approach towards certain issues, too, which led some members of the public to dub him a “meddling royal”.

William has also revealed that he wants to follow in the Queen’s footsteps.

In 2003, he praised the Queen and said: “She’s a huge role model for me — she’s incredible — and in the family she’s one of the biggest role models I have, along with my father.”

Then during a 2016 interview with the BBC’s Nicholas Witchell, he explained: “I’m in a unique position and actually a very privileged position to be able to see some of this now which is that I’ve got my grandmother, who takes a more passive role in how she believes her role should be.

“She is above politics and keeps away from it all and I’ve got my father who minds an awful lot about many of the causes he’s involved in and really digs down into his charitable areas as much as you can.”

He added: “In the Queen, I have an extraordinary eample of somebody who’s done an enormous amount of good and she’s probably the best role model I could have in front of me.”