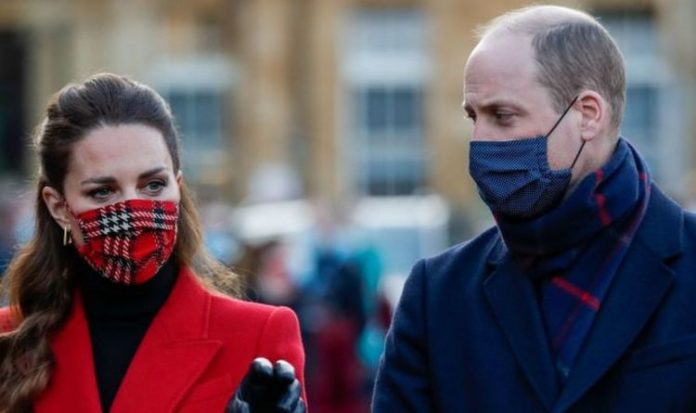 Kate and Prince William visited the Royal Berkshire Hospital yesterday afternoon before heading to Windsor Castle for the grand finale of their Royal Train Tour. The couple met outside the hospital Graham Sims, chairman of Royal Berkshire NHS Foundation Trust.

Hinting at the fact the Duchess of Cambridge was born at that same hospital in 1982, Mr Sims cheerfully told her: “Welcome back”.

Prince William also returned to the Reading hospital after having visited it as a patient.

In 1991, the Duke of Cambridge was struck on the head with a golf club while playing at Ludgrove Preparatory school in Wokingham.

The then-eight-year-old was taken to hospital for treatment, where his parents rushed to see him.

Princess Diana remained at the little prince’s bedside through the night, while Prince Charles left the hospital after seeing his son to attend a private engagement.

During their visit to the Royal Berkshire Hospital, Prince William and Kate celebrated the beginning of vaccinations against coronavirus with local nurses.

Sarah Lupai, a 38-year-old enteral nutrition clinical nurse specialist, was among those who chatted to the royals.

“They said the whole world needs a break next year for everyone’s mental health and well-being.”

The couple also spoke to maternity nurses who had delivered three babies yesterday.

Prince William, after asking whether they had managed to look after their mental wellbeing during the pandemic, added: “Keep going. There is light at the end of the tunnel.”

Prince William and Kate have focused much of their attention on providing frontline and key staff with mental health support.

In April, the Duke backed the Our Frontline initiative, which provided key workers with a 24/7 platform where they could find help if they were struggling.

He added supporting frontline workers during the pandemic would be his and Kate’s “top priority”.

This visit marked the second last reached by Prince William and Kate during their three-day Royal Train Tour.

Shortly after 4pm, the Duke and Duchess arrived at Windsor and joined the Queen, Princess Anne, the Wessexes, Prince Charles and Camilla, Duchess of Cornwall, in a public celebration of volunteers and charity workers.

This gathering marked the first public reunion of senior members of the Royal Family since Commonwealth Day service in March.

After their performance, the monarch retired inside the castle, while younger royals met local volunteers and charity workers in a marquee.

There, the guests were served mulled wine and a non-alcoholic punch and mince pies.

Among the people met there by Kate and William there was Sarah Cottle, a head teacher of three maintained nurseries in Windsor and Maidenhead.

During their chat, Kate asked the headteacher questions about her recent landmark early years survey.

Ms Cottle said afterwards: “She asked if I’d completed her survey, which put me on the spot a little and the Duke said, ‘Don’t put her on the spot’ and she laughed and said she’d had to chide her parents to get them to fill it in.”