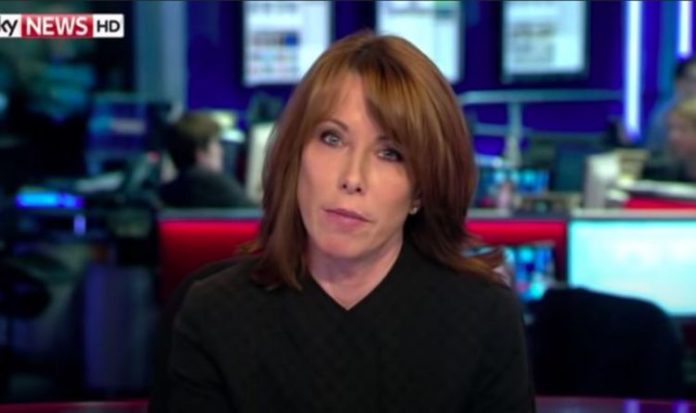 The Sky News presenter has been suspended from the media platform for six months after she was caught breaking lockdown rules. Ms Burley was among ten people who went to a restaurant to celebrate her 60th birthday in London. Among them were Sky News political editor Beth Rigby and north of England correspondent Inzamam Rashid, who will be both absent from the outlet for three months.

The veteran journalist has been a central figure at Sky News, having first joined the company in 1988 in its fledgling years.

Sky News’ editor-at-large and long time colleague of Ms Burley, Adam Boulton, made his feelings over her actions public shortly after her suspension, retweeting a message that read: “Look at the state of Sky News.

“The morons spent all summer preaching to us and now look at them!

“After illegally going on a bender, they were going to go to a hospital to put lives at risk!”

Mr Boulton has since gone on to explain why he shared the tweet, telling The Guardian that he fears it could undermine Sky News’ credibility.

He said: “That said, I retweet things because I think they’re of public interest, and certainly my feed has reflected a lot of people who are very concerned about the credibility of Sky News, and that I think is the important issue: the credibility of our journalism.”

And while Ms Burley has yet to respond to the “moron” tweet, her actions in the past over journalists criticising their colleagues might shed light on how she feels.

In 2009, Ms Burley had an altercation with LBC radio host James O’Brien over Frank Lampard and his split from his former partner.

JUST IN: Sky News’ Rigby told she ‘fell into trap’ by Boulton before breach

Sky News: Burley has spent the best part of her career at Sky (Image: Sky News)

Ms Burley immediately came to Mr Humrphys’ defence, and replied: “Openly criticising broadcast colleagues is not cool,” to which Mr O’Brien replied, “Don’t make me post the video of you criticising my ‘award-winning’ encounter with Frank Lampard, Kay…

“Or the email I kept where you claimed you’d never met him! xx”

On challenging him to publish the video, Mr O’Brien did, with Ms Burley branding him a “d*ck”.

She said: “Actually, I thought you looked like a d*ck and passive aggressive threats are so dull.

“Criticising colleagues on Twitter because you couldn’t cut it on Newsnight is not cool.

“I am not intimidated by not even the second broadcaster on LBC.”

In her long career, Ms Burley has interviewed some of the world’s political big-hitters, being on the receiving end of a number of heated discussions.

In 2018, shortly after President Donald Trump withdrew from the Iran nuclear deal, the US’ former National Security Advisor John Bolton branded her rhetoric on the issue as “unprofessional”.

While on air, he called Ms Burley a “munchkin in the media”.

Meanwhile, in a statement apologising to the public for breaking lockdown rules, Ms Burley wrote: “I made a big mistake, and I am sorry.

“I have today agreed with Sky News to step back from my broadcasting role for a period of reflection,” Burley wrote.

“It’s clear to me that we are all in the fight against Covid-19 and that we all have a duty to stick firmly by the rules.

“It doesn’t matter that I thought I was Covid-compliant at a recent social event. The fact is I was wrong, I made a big mistake, and I am sorry.

“Some dear friends and colleagues – some of the most talented and committed professionals in our business – have been pulled into this episode and I regret this enormously.

“I was one of the founding presenters on Sky News. No one is prouder of our channel’s reputation, the professionals on our team, and the impact we make.

“I very much look forward to being able to continue my 32-year career with Sky when I return.”