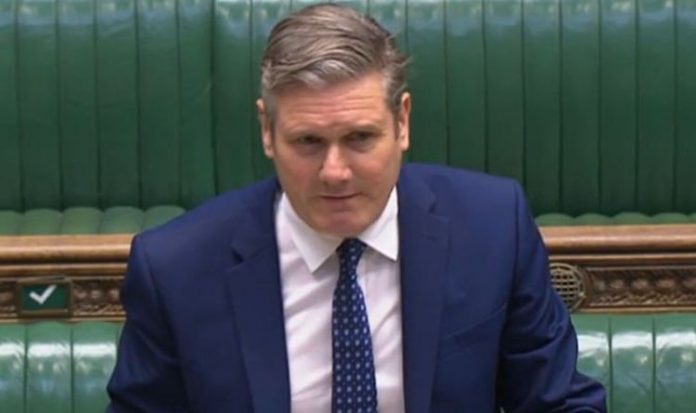 Keir Starmer has this afternoon said the party will not be joining Tory rebels in voting down the current restriction when a vote is held in the Commons next week. All pubs, bars, restaurants and other hospitality venues in England have been required to close at 10pm since September 24.

At Prime Minister’s Questions (PMQs) on Wednesday, Sir Keir indicated Labour would vote against the curfew after ordering the Prime Minister to publish the scientific evidence to support the measure.

However, less than 24 hours later the Labour leader softened his approach and called for it to be reformed rather than scrapped altogether.

Speaking on a visit to Wiltshire, Sir Keir highlighted concerns MPs would only be given a straight “take-it-or-leave-It” option.

Instead, he cited the model in Wales where people are given an extra 20 minutes to finish there drinks to enable a staggered exit from venues.

Sir Keir said: “There is growing concern about the 10pm curfew and lots of examples of everybody coming out of venues at the same time.

“We need this reformed but there is a smarter way of doing this. In Wales they have got a different set up which is working much, much better.

“And therefore if you vote down the current arrangements there won’t be any restrictions in place.

At the dispatch box during PMQs, he said: “One question is now screaming out: is there a scientific basis for the 10pm rule?

In response, Mr Johnson said: “The basis on which we set out the curtailment of hospitality was the basis on which he accepted it two weeks ago – that is to reduce the spread of the virus and that is our objective.”

Restrictions on the hospitality industry have already been announced in Scotland with indoor venues only allowed to operate between 6am and 6pm daily, selling food and non-alcoholic drinks only, while outdoor bars will be allowed to serve alcohol until 10pm.

In the five regions with the highest number of infections – including Glasgow and Edinburgh – licensed premises will have to shut for a 16-day period, although they can offer takeaway services.

This afternoon Downing Street suggested similar measures could be enforced following a surge in coronavirus cases in the northern parts of England.

Prime Minister Boris Johnson’s official spokesman said: “Early data does suggest that a significant proportion of exposure to the virus is seen in the hospitality sector, and that is even more pronounced in younger age groups where we have been seeing the most rapid rise in infections.

“The data is new and we will continue to gather evidence and review it.”