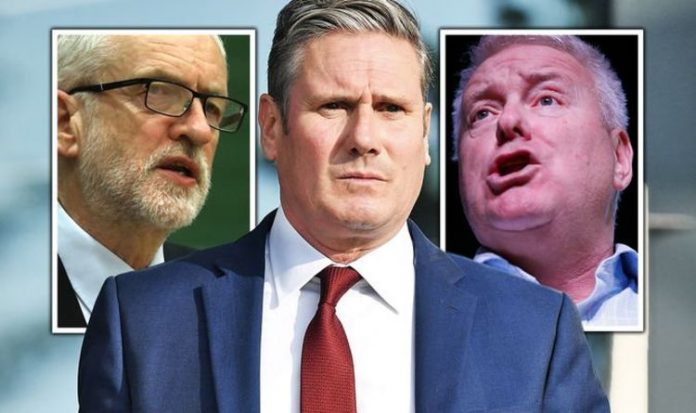 Sir Keir was this week called on by prominent allies of Jeremy Corbyn to apologise for his leapfrogging between Brexit policies. It came as veteran members on the Left of the party claimed the decision to support a second Brexit referendum cost Labour its so-called Red Wall in the North of England. Ian Lavery, Jon Trickett and Laura Smith – all of whom were frontbenchers under Mr Corbyn – have filed a report into attitudes to the party among its supporters.

It is this document that sparked the calls for an apology, whereby the authors said a considerable element of Labour’s 2019 failure among the working-classes was due to its Brexit approach.

While Sir Keir was Mr Corbyn’s shadow Brexit secretary, the party went into last year’s election on a manifesto that promised a second referendum.

Labour said if it won the 2019 vote it would renegotiate the Brexit agreement with the European Union before putting that deal back in front of the British people in the form of another referendum – with Remain on the ballot paper.

This was a stance seen largely spearheaded by Sir Keir, with Mr Corbyn initially weary to put the question to the electorate.

Since becoming leader in April and with the UK leaving the bloc at the end of January, Sir Keir has changed his tune and said the party must now acknowledge that Brexit has happened.

It is a point which Mr Lavery – who has taken a back seat since Sir Keir came to power – has long held against the new leader.

Even before the fresh calls, Labour had experienced considerable infighting over Brexit.

By 2018, as recounted in Gabriel Pogrund and Patrick Maguire’s book ‘Left Out’, Labour’s “Shadow Cabinet was fragmenting” on the issue.

JUST IN: After Starmer sent warning, should Labour APOLOGISE to Brexiteers?

Senior MPs, including Corbynites like Dianne Abbot, wanted to promote a second vote.

Yet, Mr Lavery appeared to see the issue this would create with the party’s base of loyal supporters in the North of England, with many of whom voting to leave the EU.

Mr Trickett, alongside Mr Lavery, according to the book, foresaw the election drubbing to come if Mr Corbyn sided with the likes of Ms Abbott and Sir Keir.

Mr Pogrund and Mr Maguire said: “At meetings of the Brexit subcommittee she (Ms Abbott) argued alongside Ms Thornberry and Sir Keir in opposition to Mr Trickett’s and Mr Lavery’s axis of blokeishness.

“His rage did now cow Sir Keir; whose manoeuvres in the lead-up to the conference would give Mr Lavery his answer.”

Labour went on to pass a motion at the conference in September 2018 that would leave the door open for a second referendum.

Despite the policy becoming more refined in the lead up to the 2019 election, the initial move resulted in disaster and the party’s worst election defeat since 1935.

Prime Minister Boris Johnson now sees himself as a leader with one of the biggest Tory majorities since Margaret Thatcher was in Downing Street.

Mr Lavery’s frustration with Sir Keir and those members who voted to pass the motion may now be fully understood.

Meanwhile, in a joint article for HuffPost UK, Mr Lavery, Mr Trickett and Ms Smith said: “Labour got it wrong on a second referendum.

“The party went against one of the only times in recent history that people felt they could finally express their justified anger at the present political system.

“To rebuild trust that has been lost and restore people’s trust in politics, Labour should say sorry. This is not only about Labour winning elections but restoring faith in democracy.

“We do not believe that the party can move on until it has put this issue behind us.”

They added: “The country, our voters and our activists all deserve an explanation and perhaps an apology by the party for our actions in the years after the referendum up until the December election.”