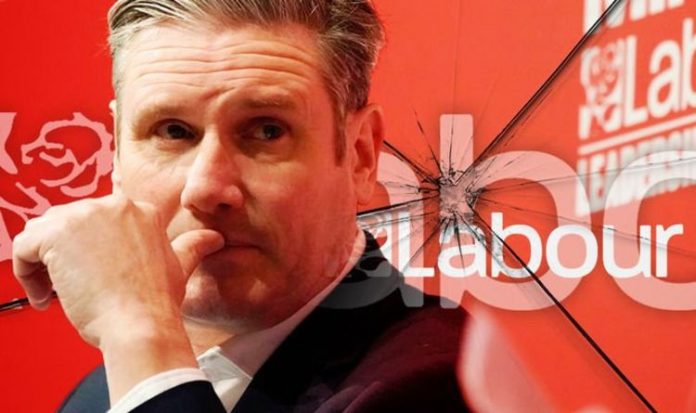 Sir Keir currently faces a myriad of dilemmas as his party struggles in the face of Brexit and coronavirus crisis. The party’s radical Left are pressuring the new leader over the decision to strip former leader Jeremy Corbyn of the whip after his reaction to a bombshell report declared under his supervision, Labour was responsible for “unlawful” harassment and discrimination. Now, Sir Keir faces an even greater challenge in garnering the support of his shadow cabinet to back Prime Minister Boris Johnson’s Brexit deal – something which flies in the face of many staunch Remainer Labour MPs including Sir Keir himself.

Dr Jonathan Mellon, a senior politics researcher and co-director of the British Election Study (BES) at the University of Manchester, told Express.co.uk these crises are seriously dirtying Sir Keir’s “new management” image and his attempts at rebranding Labour since Mr Corbyn.

Talking about the antisemitism debacle and murmurs of discontent from the radical Left in the party, he said: “This could roll on indefinitely, or could be something that fades away quite quickly and things bounce back.

“If this carries on until the next election and there is constant infighting between Corbyn and Starmer and their relative camps, that’s going to be a problem for the Labour brand, a problem for projecting unity and a single message ahead of an election.

“If it’s gone by a week’s time, probably no one will remember this by the next election and Starmer will have got rid of a thorn in his side at a level cost.

Labour Party: Starmer has said that Labour is ‘under new management’ (Image: GETTY)

“So it really depends on how long this lasts.”

The issue remains open some months after it began.

The results produced a 50/50 split between moderate candidates and radical, grassroots-based social activists.

JUST IN: A year on from the election Labour hasn’t learnt a thing- ESTHER MCVEY

Jeremy Corbyn: Many of Corbynites are pushing for the former leader to have the whip restored (Image: GETTY)

While Luke Akehurst, a prominent critic of the former leader, came first place in the Constituency Labour Party (CLP) vote, Laura Pidcock, who served as Shadow Secretary of State for Employment under Mr Corbyn, won the second-highest number of votes in the CLP.

Ms Pidcock, along with several other high-profile Corbynites, has gone on to demand Mr Corbyn be restored to the Parliamentary party.

Dr Mellon reasoned that despite Sir Keir being a relatively new face to the public, his image could quickly be tarnished and his legitimacy called into question.

He said: “I think Starmer is still introducing himself to the public, and when you’re doing that, when people don’t really have fixed views of you, if months and months of coverage about you is about internal squabbles, about power struggles, about people throwing mud, that’s going to contribute negatively to his image.”

Although, he suggested his move to strip Mr Corbyn of the whip and condemn his actions could help garner support, and said: “It seems like his ability to go and distance himself from the antisemitism allegations against Corbyn by taking a very strong stance probably plays positively overall to his image.

“The internal disagreements or the fighting with Corbyn is probably negative to his brand, but on the other hand it’s of service of improving the Labour brand and his own brand as well – he’s not doing it for no reason, and there may be positives to distancing himself from a leader who has been perceived as negative.”

Despite this, Sir Keir now faces the challenge of persuading these MPs as well as his allies to support the Prime Minister’s Brexit deal.

It is currently thought the chances of a Brexit deal are no higher than 50 percent, with Mr Johnson reportedly preparing to announce no-deal to the public in a televised address.

Sir Keir is already thought to have been set on backing a Brexit deal should it be agreed and returned to the Commons for a vote.

Despite being one of the main architects of a second vote, on coming to power, he urged party members to “respect” and “accept” that the referendum result.

Many, like Paul Embery, a leading trade unionist and “Blue Labour” member, said Sir Keir intended this move to win back the swathes of Red Wall seats – working class, Leave voting North of England communities – the party lost in the 2019 election.

Boris Johnson: The Prime Minister is thought to be preparing for a no-deal scenario (Image: GETTY)

However, in a conference call with Labour’s affiliated union bosses on Friday, Sir Keir was urged by some to back away from a decision over the potential vote.

This was, reports suggest, at least until details of any agreement are published and analysed.

Labour members are now keen to abstain, with up to 60 backbench shadow MPs threatening to rebel rather than allow a free vote.