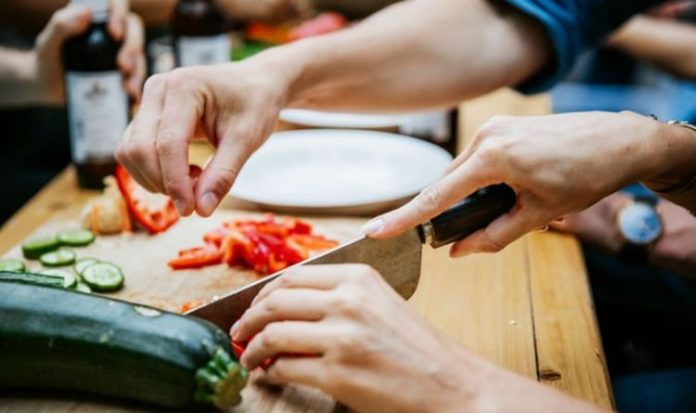 Aldi: Joe Delaney shares his tips for healthy meals on a budget

It may not sound like much, but she knew the impact this simple act could make to someone’s life. She was repaying the kindness that she had experienced 18 years earlier after experiencing a terrible accident in 2002. While out riding her horse bolted under a tree that was too low for her, causing extensive injuries to her face and arm that left her incapacitated. But despite being a newcomer in Thorncombe, the tiny Dorset village rallied round and gave her the support and friendship she desperately needed. The small acts of kindness she received from neighbours have stayed with her and now this gratitude has been transformed into a movement.

Together with nutritionist Jane Clarke, editor Catherine Fenton and PR manager Laura Nathan, she is launching Share A Meal today.

The campaign also has the backing of Bake Off’s Prue Leith and MasterChef’s Gregg Wallace who have provided recipes. The Hairy Bikers and Michelin star chef Phil Howard have also pitched in.

The campaign is urging us, just once or twice a week, to make an extra portion of food to share with neighbours.

This could be someone living on their own who has lost the motivation to cook or an elderly vulnerable person who is self-isolating because of Covid.

The campaign’s motto is Every Street a Village, which harks back to an idea of a forgotten sense of togetherness.

Small acts of kindness received from neighbours have been turned into a movement (Image: Getty )

While the erosion of traditional community bonds has been evident in the UK’s big cities for several years, Covid-19 has thrown this into stark relief, exposing how isolated some individuals are.

Sarah explained: “Villagers have a centuries-old legacy of coming together, helping one another out.

“But we have lost much of that community spirit and this year it has become all too clear what holes there are in society, and the number of people who get left behind.

“That’s why we wanted to make every street a village. You don’t have to think bigger than a few doors down from you but the difference you can make is huge.

“I believe in the ripple effect of kindness. When you do something for someone else it makes you both feel better. And then maybe they will pass it on, or you will be encouraged to do it again.

“I had only lived in Thorncombe a few months, but neighbours showed me so much kindness. One made me homemade soup every single day, others did my shopping or looked after my cats.

“I was enveloped in the warmth of a small community, and this is what we want to share here.”

To get up and running Share A Meal has had many supporters volunteer their time and expertise, including website developler Den Creative and graphic designer Jenny Semple.

The Utley Foundation, a charitable trust, has made a generous donation to the cost of the food photography.

Depending on local restrictions, meals could be eaten together in one person’s house or garden.

The campaign also has the backing of Prue Leith (Image: PA)

But if households are prohibited from mingling, people can still help by dropping off meals. The Share A Meal website offers one-pot recipes that are delicious as well as simple to prepare.

And nutritionist Jane Clarke hopes to show people how to eat healthily, heartily and seasonally in the process.

She said: “My daughter and I were already cooking for our neighbours and it just made sense to make it bigger, to make it a national campaign.

“It is about connection with your community. It doesn’t need to be complicated – we want to show that really wonderful healthy food can be simple.

“Budgets are stretched so we have made the ideas accessible. It can just be a bowl of delicious soup.

“Share a Meal is for everyone. From villages, to cities, from older people to a student living in halls.

“Covid has exposed vulnerabilities we didn’t realise were there – or we chose not to see. A simple act of kindness goes a long way. There is no better way to connect than through food.”

Bake Off judge Prue Leith and her niece Peta, a former chef at London’s The Ivy, donated a vegetable curry recipe.

Prue said: “It’s a lovely idea to cook a simple meal for a neighbour who lives alone. Peta and I hope you will have fun creating and sharing this delicious curry.”

Gregg Wallace added: “We can make a difference and have a positive impact – we just need to reach out.”

Other suggestions have come from chef Andreas Winghert, who has 15 years experience in top end restaurants, including Lucknam Park Hotel near Bath.

He said: “Food triggers memories, it is such a powerful force. It can build relationships and create friendships – that’s why this is such a wonderful idea. People will feel happier about themselves because they have done something good.

“This isn’t about cooking something high end – it’s about going back to basics. A wonderful shepherd’s pie or a classic bolognese is delicious, hearty and healthy.

“As it gets darker and people can’t get out it will get very lonely for some. There is a tough winter ahead so to have something to look forward to is so important.”