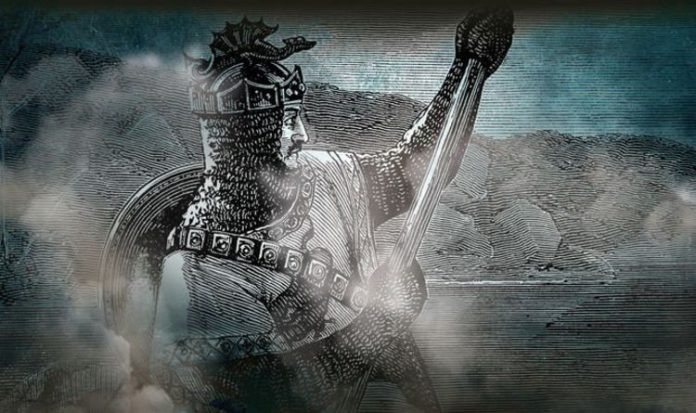 To this day historians debate the existence of King Arthur, the legendary British leader who is fabled to have beaten Saxon invaders during the fifth and sixth centuries. Armed with the magical sword Excalibur, he and the Knights of the Round Table are claimed to have overcome a number of mythical and some more believable feats. Later King Arthur embodied the ultimate symbol of chivalry and honour before he vanished – only to return when Britain was in great peril. Finding the truth about the UK’s most elusive hero is no easy task but experts believe they may have identified the inspiration behind his infamous tales.

Ambrosius Aurelianus was initially tipped as a likely candidate, whose victories might have been drawn upon to form the stories of King Arthur, for a number of reasons.

Medieval expert Geoffrey Ashe described him as a “resistance leader” and pointed out that the name Arthur is a Roman form of the name Artorious, not overly dissimilar from his name.

The general’s feats in battle were recorded by the Monk Gildas in a number of documents that have survived to modern day.

Ambrosius was a “ruler from high-ranking Roman lineage” who was known to have rode horseback into battle countless times.

It’s also believed he could have helped to fuel the tales behind Excalibur, according to Hector Cole, a London blacksmith who specialises in ancient weaponry.

He said: “The Romans evolved the Celtic longsword and they found that it was ideal for horseback and was far more effective than the very short blade, which they had with the footsoldiers.”

As a mounted officer, Ambrosius would have carried one of those Celtic longswords – which developed a “fearsome reputation” for its strength and distinctive appearance.

Cole said: “Excalibur, as a magical weapon was a longsword, I think, the better swords of the Roman period tended to be what we call ‘pattern welded’.”

The blacksmith then demonstrated how to forge that type of sword – in the 2010 episode of Amazon Prime’s ‘Mystery Files’ – which involved twisting iron rods, repeatedly hamoring and heating the weapon.

Once the impurities had been ironed out and the outer layer of carbon filed away, it was cleaned with a strong acid that helped to “unveil the blade’s distinctive pattern”.

The process allegedly “manufactures a blade of superior strength” and also has an impressive decoration of swirling marks – visible on either side of the sword.

Cole added: “I think the actual legend of Excalibur came from the actual pattern welding of the blade because it is that patterning that gives the sword its magic.”

Ambrosius was claimed to have carried a “magical and mighty sword” during his battles – which fits ones of the beliefs about King Arthur.

However, Geoffrey Ashe doesn’t believe he’s accountable for the whole myth, noting: “Ambrosius is an important person but I don’t think he accounts for everything.

“He is not a king, he doesn’t flourish over a long enough period to be Arthur [and] there is no clear evidence as to how much actual leading of the Britons that he did.”

Despite this doubt, other historians believe the tales of Ambrosius’ heroism could have been forged with another military commander to pen the tales of King Arthur.

The stories of Riothamus, a Romano-British leader with a notable war record, could have been compiled to create the legend.

He was believed to have died overseas after being betrayed by a general and last seen as he fled in the direction of Avallon, an area in Burgundy, France.

In one account of the legend of Arthur, he was similarly betrayed by Lancelot who had an affair with his wife Guinevere and later his nephew Mordredus, who he later defeated in battle.

He’s never seen again after travelling to the Isle of Avalon for treatment of his “mortal wounds” – the location, potentially named after Riothamus’ supposed final resting place.

Professor Christopher Snyder, who has published a number of papers on early British documents and history, gave his insight.

He said: “There are many elements in the careers of both Ambrosius Aurelianus and Riothamus that could have contributed to the legend of Arthur.

“Writers like Geoffrey of Monmouth (an author who wrote about the supposed legend) could have taken these elements and helped to construct a career for Arthur.”

The documentary added: “Both appear to have merged to form a fictional King Arthur, this mythical Arthur is then transformed into the form that embraces knights in the world of Camelot, betrayed by those he trusted the most.”

‘Mystery Files’ was filmed in 2010 and is available to watch on Amazon Prime Video.