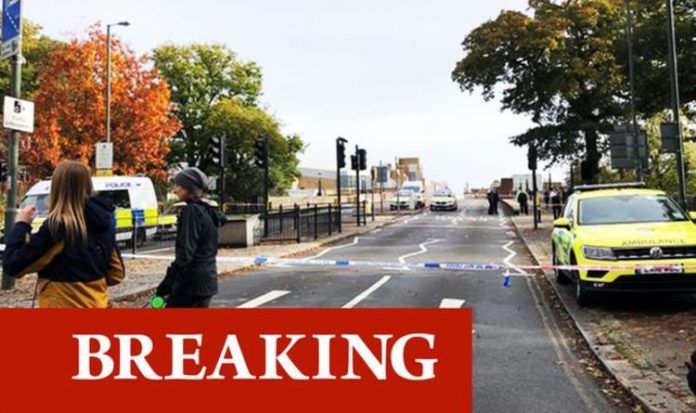 Officers have swarmed the Bentall Centre, the largest shopping centre in Kingston, to carry out an evacuation. The local council confirmed an “incident” was ongoing while reports on social media suggested there had been a bomb scare.

Kingston Council tweeted: “#Traffic Police have closed Wood Street between the Bentall Centre and John Lewis due to an incident.”

They later added: “Police have now closed Wood Street and Kingston Bridge in both directions.”

One man said: “Apparently there is a bomb scare in Kingston town centre and all the shops and Bentall Centre have been evacuated.”

Another person said a police cordon has been erected around the John Lewis store in the shopping centre.

He said: “Area around John Lewis in Kingston has been cordoned off by the police because of a suspected bomb in the building.

“Took me ages to find a way back home, and I live less than five minutes from the store.”

The BBC reported a car crash had happened in Kingston Horse Fair, prompting a closure between Kingston Bridge and Wood Street.

Later reports suggested police closed the area due to a “security alert”.

A man out walking his dog said he was told about a “serious bomb threat” in the area.

Photos from the scene show at least five police vehichles and an emergency first reponder vehicle near a cordon.

Police officers can be seen standing in the background.

A spokeswoman for the Metropolitan Police confirmed there had been a bomb threat.

She said: “At approximately 09:47hrs on Wednesday, 28 October, police were contacted by a department store at Wood Street, Kingston where a bomb threat had been received.

“The store has been evacuated and London Ambulance Service are in attendance as a precaution. There have been no reported injuries.

“A number of closures, including Kingston Bridge, are in place while officers search the premises. Enquiries continue.

“This incident is not believed to be terror related.”