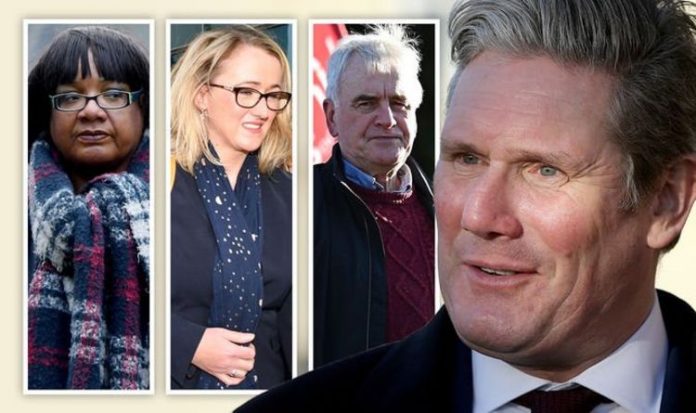 Sir Keir is hoping to shift the Labour Party into a new gear as he prepares to draw up a manifesto and shed the outfit of its radical left-wing image assumed under former leader Jeremy Corbyn. Last week, he whipped MPs to support Prime Minister Boris Johnson’s Brexit deal, a move which many of Mr Corbyn’s allies – Corbynites – opposed vehemently. Their opposition to the new leader was already clear after Sir Keir suspended Mr Corbyn from the party in October, only to reinstate his membership but refuse to restore him to the whip.

There is talk of a small group of Corbynite, socialist-leaning MPs, mostly backbenchers, who are seeking to make Sir Keir’s job as difficult as possible.

This was partially exposed after 37 Labour MPs either abstained or voted against the Government’s Brexit deal in defiance of the wishes of their own leader.

This will be something that continues into the future, Steven Fielding, Professor of Political History at the University of Nottingham, told Express.co.uk, as a small group push against what they view as Sir Keir’s watering down the party’s traditional place in politics, and hope to “rebuild” and regroup to their former standing.

“Certain individuals like Richard Burgon, and organisations like Momentum are always going to criticise him for not doing enough because they always measure him against what Jeremy would have done.

“But they can be discounted – they’re not really serious.

“Within the internal politics of the Labour Party, they’re obviously playing for a certain position, and are hoping for at some point they’ll be able to rebuild.

Corbyn: The former leader was hasn’t had the whip restored since he was reinstated to the party (Image: GETTY)

“But just now, they’re simply harping, they’re not serious figures, at least not yet.”

Within hours of the Brexit deal being announced, three Labour MPs resigned as junior frontbenchers.

Tonia Antoniazzi, the MP for Gower, Helen Hayes, the Dulwich and West Norwood MP, and Florence Eshalomi, the MP for Vauxhall, resigned from their posts.

In a statement on her website, Ms Hayes, who was a shadow Cabinet Office minister, said: “This is a bad deal which will make our country poorer.

“It will cost jobs, undermine our security, weaken our standing in the world, risk workers’ rights and environmental protections, and limit opportunities for our children and grandchildren.”

Nicola Sturgeon: Many say Starmer is fearful that Scotland will break away from the union (Image: GETTY)

Sir Keir appears to be trying to appease members of his party in a new push for devolution across the UK.

Many noted that his announcement of a “constitutional commission” was a sign that the Labour leader is fearful of an independent Scotland and a loss of seats and relevance that would hit the party hard.

And while the push for devolved powers has been welcomed by many Labour MPs, others say it is yet another sign that the party is out of touch with the electorate.

Paul Embery, a leading trade unionist and Labour member, told Express.co.uk, that Labour had already tried considerable devolution during Tony Blair’s leadership, in the early Noughties, which only led to yet more bureaucratic tiers of Government with no “real affinity”.

Brexit news: Since 2016 Starmer has flip-flopped on his Brexit rhetoric (Image: Express Newspapers)

READ  Britain under 'no deal' will be more bureaucratic - UK

Mr Embery noted the failed 2004 North East devolution referendum, in which those living in the region voted against 78 percent to 22 percent.

He said: “I don’t think people really like the idea of regional Governments.

“The Labour Party tried it back in the early 2000s with the North East and it wasn’t taken up by people.

“I think people see these regional prospective governments as artificial constructs, and people just think it’s another tier of Government that doesn’t have any real affinity.

“If you go to the North East people might feel Geordie or they might feel that they’re from a particular place or county like Durham, but they don’t feel like a North Easterner, that doesn’t really have much meaning.

“If you go to Devon and Cornwall, people might feel like they’re from Devon or Cornwall and have an affinity to those counties, but they don’t feel like South Westerners.

“So I don’t think this regional stuff cuts through.”

Although Sir Keir’s message was largely aimed at Scotland, he will hope those in the North of England take note, those communities in the so-called “Red Wall” – working class, Labour safe seats that fell to the Tories in 2019.

His support of Mr Johnson’s Brexit deal has also been viewed as a way to win those voters back.