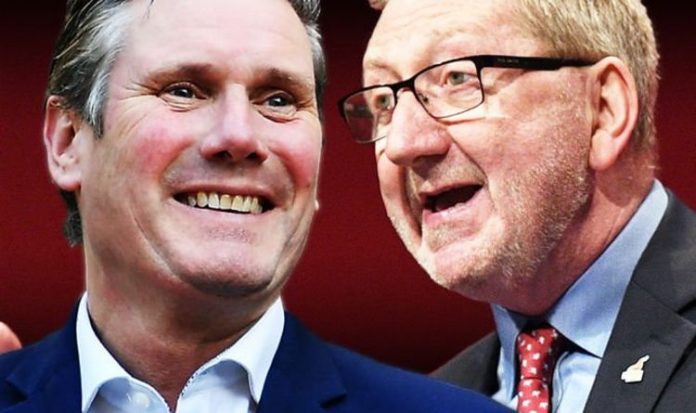 Mr McCluskey, general secretary of Unite the Union, is set to stand down next year, and alongside other union leaders will, despite being disgruntled with his leadership, accept Sir Keir’s more centrist manifesto. It comes as the Labour Left appears to be being squeezed from the party. Divisions and infighting were only deepened this week after Labour members were told that Ian Murray of the Fire Brigades’ Union would be blocked from becoming chair of the National Executive Committee (NEC).

This was only worsened after Mr Corbyn was kicked out of the party, briefly readmitted, only to then have Sir Keir refuse to restore his whip.

Despite the clear move towards the centre-ground with any unions likely to diminish in influence, many will still commit their support to Sir Keir in a future election, according to Dr Jonathan Mellon, a senior politics researcher and co-director of the British Election Study at the University of Manchester.

Dr Mellon explained that unions would be forced into backing Sir Keir if they wanted to ensure Labour wins the next general election, ousting the Tories in the process.

Len McCluskey: The trade union boss and others will be forced to support Sir Keir Starmer in 2024 (Image: GETTY)

Keir Starmer: The Labour leader made the decision not to restore the whip to Jeremy Corbyn (Image: GETTY)

He told Express.co.uk: “I think in general the unions of course are not going to want another Tory term, regardless of who’s the head of Labour.

“If push comes to shove they would prefer to go and back Keir Starmer rather than implicitly back another five years of a Boris Johnson Government.

“It’s hard to see the unions doing anything that really fundamentally commits to another Conservative Government given their general political preferences.”

Mr McCluskey has attempted to make himself and the unions heard through economic means.

Jeremy Corbyn: The former leader pictured on the day of his suspension in October (Image: GETTY)

In October, he withdrew ten percent of Unite’s funding to the party, around £150,000.

He has since threatened that another cut in funding might happen should the party’s course change too drastically under Sir Keir.

He has said: “I have no doubt if things start to move in different directions and ordinary working people start saying, ‘Well, I’m not sure what Labour stands for’, then my activists will ask me, ‘Why are we giving so much money?'”

It is worth noting that Mr McCluskey retires next year.

But, other trade union top brass within Unite, Howard Beckett, for example, who will hold considerable influence in the future, remain closely aligned with their current leader’s line of thought.

Elsewhere, Dave Ward, general secretary of the Communications Workers Union, said Sir Keir’s decision to kick Mr Corbyn out of the party in the first place “reeks of political opportunism”.

Meanwhile, Labour’s chief whip has demanded that Mr Corbyn “unequivocally” apologise for saying the scale of antisemitism in the party.

The former leader said the issue had been “overstated for political reasons”.

In a letter to his former boss, Nick Brown, Labour’s chief whip, said Mr Corbyn’s response to the report caused “distress and pain” to the Jewish community.

The infighting appears to be eating the party from the inside out according to a new inquiry.

Set to be published within weeks, many have said it will further erode Sir Keir’s attempts to “unite” the party under his “new management” vision.

The report alleges that internal hostility to Mr Corbyn’s leadership towards the end of his tenure hampered efforts to tackle antisemitism and damaged the 2017 election campaign.

Leaked documents: A report into meddling into Corbyn’s campaigns is due to be released (Image: GETTY)

Mr McCluskey has several times pointed to the leaked report that says staff who opposed Mr Corbyn sought to meddle in his campaign by taking money from his team’s control.

John McDonnell, a closer ally of Mr Corbyn, has said the report was commissioned by former general secretary Jennie Formby and put together by the party’s governance and legal unit.

It was originally meant to be submitted alongside the Equalities and Human Rights Commission (ECHR) report into antisemitism, but was blocked by Labour’s lawyers.