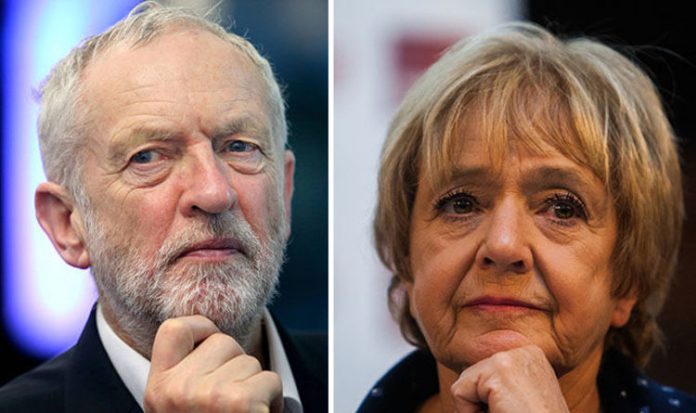 A spokesman for Mr Corbyn said “action will be taken” against Dame Margaret under Labour rules for respect to be shown between colleagues.

He added: “The behaviour you are talking about was clearly unacceptable.”

The comments come after Labour’s plans to tackle anti-Semitism were condemned by Jewish groups as Mr Corbyn was confronted by a furious MP about the party’s handling of the controversy.

The party’s ruling body approved a new code of conduct on anti-Semitism despite intense criticism from the party’s MPs and peers as well as Jewish leaders.

The move reportedly led senior MP Dame Margaret to launch an angry tirade against party leader Mr Corbyn in the Commons, calling him a “f****** anti-Semite”.

The document states explicitly that “anti-Semitism is racism” and it is “unacceptable”, but stops short of signing up in full to the definition drawn up by the International Holocaust Remembrance Alliance (IHRA).

Labour’s National Executive Committee signed off the code at a meeting on Tuesday but members agreed to reopen the development of the policy in recognition of the “serious concerns” raised.

In the Commons, Dame Margaret challenged Mr Corbyn behind the Speaker’s chair after crunch votes on Brexit.

The Huffington Post reported that Dame Margaret told him: “You’re a f****** anti-Semite and a racist … You have proved you don’t want people like me in the party.”

Mr Corbyn reportedly told her: “I’m sorry you feel like that.”

A senior Labour source confirmed a confrontation has occurred. Dame Margaret has not responded to requests for a comment.

Labour officials drew up the code in the wake of protests by Jewish groups outside Parliament earlier this year.

It states that criticism of the state of Israel and its policies should not automatically be regarded as anti-Semitic, and makes clear that even “contentious” comments on this issue “will not be treated as anti-Semitism unless accompanied by specific anti-Semitic content … or by other evidence of anti-Semitic intent”.

The code explicitly endorses the IHRA’s working definition of anti-Semitism and includes a list of behaviours likely to be regarded as anti-Semitic copied word-for-word from the international organisation’s own document.

But it omits four examples from the IHRA list:

– Accusing Jewish people of being more loyal to Israel than their home country;

– Claiming that Israel’s existence as a state is a racist endeavour;

– Requiring higher standards of behaviour from Israel than other nations; and

– Comparing contemporary Israeli policies to those of the Nazis.

Labour insisted that while the examples are not reproduced word for word, they are covered in the new code.

But Jewish community groups condemned the NEC’s decision and warned “on its current trajectory, Labour is failing British Jews and it is failing as an anti-racist party”.

In a joint statement, the Board of Deputies, Jewish Leadership Council and the Community Security Trust said: “The decision taken by the NEC today to adopt a watered-down definition of anti-Semitism will be regarded with a mixture of incredulity and outrage by the overwhelming majority of the UK’s Jews.”

The groups added: “The NEC has chosen to disregard the views of the Jewish community, an unprecedented show of unity by rabbis from every part of the community and even its own parliamentarians.

“They have distorted and diluted the IHRA definition of anti-Semitism that is widely accepted and used by the Jewish community, the UK Government, the Scottish Parliament, the Welsh Assembly, the Crown Prosecution Service, the police, and dozens of local authorities, to create their own weaker, flawed definition whose main purpose seems to be to protect those who are part of the problem.”

In a statement, the Jewish Labour Movement said: “The Labour Party has acted in a deliberate and offensive reckless manner in believing it understands the needs of a minority community better than the community itself.”

Labour Against Antisemitism said it was looking at its legal options and would be making a formal complaint to the party.

Comedian Eddie Izzard, a member of the NEC, said he had called for the IHRA definition and the examples to be adopted in full.

A Labour Party spokesman said: “The NEC upheld the adoption of the code of conduct on anti-Semitism, but in recognition of the serious concerns expressed, agreed to reopen the development of the code, in consultation with Jewish community organisations and groups, in order to better reflect their views.”