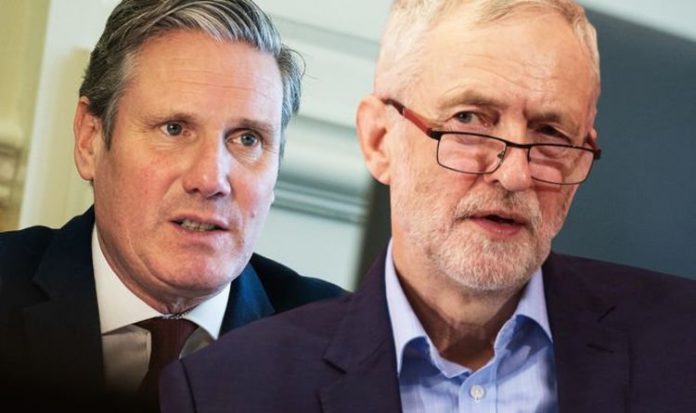 Sir Keir Starmer, the Labour Party’s new leader, once again took aim at Prime Minister Boris Johnson and his handling of Government today. It came as Mr Johnson’s Director of Communications Lee Cain resigned amid suggestions of internal tensions in Downing Street. Sir Keir told the Government to “focus on the job in hand” – the coronavirus crisis and looming transition period end date – rather than “squabbling” in No 10.

He called on Mr Johnson and his Cabinet to “pull yourselves together” amid signs of a bitter power struggle at the top rungs of the Prime Minister’s administration.

Sir Keir has upped his rhetoric against Mr Johnson since he suspended former leader Jeremy Corbyn nearly two weeks ago.

The move came following Mr Corbyn’s statement in light of the Equality and Human Rights Commission (EHRC) report on antisemitism in the party under his leadership.

While he condemned racism as a “cancer”, Mr Corbyn appeared to evade any responsibility for the report’s findings, and said: “The scale of the problem was also dramatically overstated for political reasons by our opponents inside and outside the party, as well as by much of the media”.

Keir Starmer: The Labour leader and his party are anxious to handle the Corbyn debacle with care (Image: GETTY)

Labour Party: It is nearly two weeks since Corbyn was suspended from the party (Image: GETTY)

In response Sir Keir suspended Mr Corbyn much to the dismay of his allies and left-wing Labour members.

Reports have since emerged that talk of Mr Corbyn and the EHRC have been banned in the party.

Mr Corbyn said he would fight the suspension.

An email from Labour’s general secretary, David Evans, warned local party officials that he will “not hesitate to take action” should they allow members to break this rule.

Jeremy Corbyn: The former leader has said he plans to contest the suspension (Image: GETTY)

Tim Bale, professor of Politics at Queen Mary University, told Express.co.uk this was a clear sign that Labour was increasingly conscious of its image and desire to appear as though it is responding to the EHRC report.

“I think it’s true that this is to some extent the Starmer regime trying to control the situation, but it’s also showing his want of reducing the party’s liability or vulnerability to further action.”

Corbyn latest: Corbyn pictured on the evening of his suspension (Image: PA)

Labour latest: A well-wisher leaves flowers at Corbyn’s home in light of his suspension (Image: GETTY)

It has also been reported that former shadow attorney general Baroness Shami Chakrabarti is working on a legal case to get his suspension revoked, a point which Sir Keir has vowed to “talk” to the Baroness about.

It is worth noting that Unite is Labour’s single biggest donor.

General election: It is nearly a year since Labour suffered its worst election defeat since 1935 (Image: Express Newspapers)

Prof Bale said that the more people who take similar actions, the more it will look as though Sir Keir is failing to reinforce the seriousness of the report’s conclusions.

He said: “He and the party would rather the local factions throughout the country didn’t start party resolutions claiming solidarity with Corbyn and therefore implicitly criticising the report.

“There’s no doubt they would like to keep a lid on that criticism, but also I think they’re very concerned about how the party handles the suspension of Corbyn.

Len McCluskey: The trade unionist is a close ally of Corbyn (Image: GETTY)

“They seem to want there to be a completely clean and fair process and they don’t really want the party commenting on it in public as it goes through.”

In order to pursue this “fair” process, Sir Keir has said his office will not participate in the review over Mr Corbyn’s suspension.

The veteran politician’s future now rests with the party who will launch an investigation into the decision.