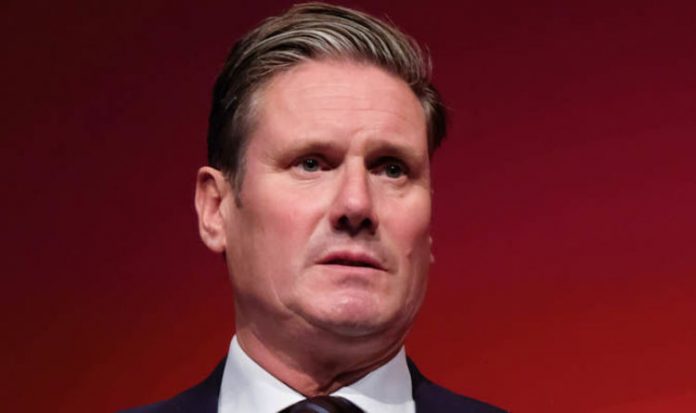 In a Labour conference speech that was given a standing ovation, the shadow EU exit secretary veered off his script to insist: “Nobody is ruling out Remain as an option.”

He also hinted that Labour could back an extension to the EU departure process.

Delegates voted overwhelming for a motion not ruling out a second EU referendum and keeping “all options open” last night.

But in a sign of the bitter divisions over the issue in Labour ranks, Jeremy Corbyn declined to endorse the idea of a second referendum.

“We haven’t said there’s going to be anything yet,” he said.

In another day of chaos over Europe at the conference in Liverpool, Sir Keir pledged that Labour MPs will vote against any Brexit deal that fails to meet six tests set by his party.

He insisted that the country should have “other options” than a general election if the deal is rejected by the Commons.

“That must include campaigning for a public vote,” he said.

“It is right that Parliament has the first say but, if we need to break the impasse, our options must include campaigning for a public vote and nobody is ruling out Remain as an option.”

His remark – applauded by around two thirds of delegates in the hall – had not been included in a text of the speech circulated before he stood up and cleared by Mr Corbyn’s office.

Labour would also vote down a “vague” deal, a so-called “blind Brexit” that did not spell out details of the future relationship.

“This is not about frustrating the process,” he said. “It is about stopping a destructive Tory Brexit.”

At a conference fringe event, Sir Keir said he did not know whether Brexit day would be delayed.

“I don’t know whether Article 50 will have to be extended or not,” he said.

“I do know we are running out of time.”

But his frontbench colleague Emily Thornberry went further by that the Article 50 EU exit process could be extended.

“We cannot obviously leave in current circumstances, we need to extend Article 50,” she told a conference fringe meeting.

“I don’t know how long it will take – but we need to extend article 50 and essentially turn up in Europe and say the grown ups have turned up now, let’s sit down and talk.”

Labour’s shift towards calling for a second referendum and delaying the departure process was attacked by the Tories and Brexit campaigners last night.

EU Exit Secretary Dominic Raab said: “The Labour Party promised to voters in their manifesto to respect the referendum. But they are now tearing up that pledge, failing to deliver on the instruction of the British people. They would take us all back to square one.

“Their decision to vote down any deal in Parliament – no matter what the terms – is unprincipled and shows that the Labour Party is putting political calculation above the national interest.”

Former Labour minister Gisela Stuart, chairman of the Brexit-backing campaign group Change Britain, said: “If the Labour Party fails to honour the referendum result, it will distance itself from the millions in Labour heartlands who voted to take back control and further damage the trust between the public and politicians.

“The Labour leadership must be unequivocal in its opposition to a second referendum –  17.4 million people voted to leave the EU, and their democratic wish should not be undermined.

“Voters want politicians to get on with the job of delivering Brexit, rather than trying to reverse the referendum simply because they don’t agree with the result.”

“We have already had a vote on the UK’s membership of the EU; it’s been done and dusted.

“The Labour Party and its members must accept this and move on – we are playing with fire, and we are very close to getting burnt.”

He added: “The fact that people, like Keir Starmer, are throwing around the possibility of a second referendum is devastating to the party’s brand. It makes us look like the party of Remain.”

“While members rejoice, we must not forget the voters we need to win over,” the MP for Leave-voting Stoke-on-Trent Central said.

In a series of broadcast interviews last night, Mr Corbyn refused to back a second referendum.

Asked whether he was concerned that Labour-supporting Leave voters would feel he was standing in the way of Brexit, he told ITV News: “I’ve travelled a great deal around the country. I spend a lot of time talking to people.

People voted different ways in the referendum but nobody voted to lose their jobs or voted to damage the living standards of the majority of people in this country.

“They voted leave out of anger – anger at deindustrialisation, anger at fly-by-night economics which replaces skilled unionised jobs with zero hours contracts.”

Asked whether the two-year Article 50 negotiation process could be extended, Mr Corbyn told Sky News: “That is not in our hands. Article 50 can only be extended by the agreement of the entirety of the European Union.”

He added: “We are very positive about the arrangement we want, the deal we want with the EU around the six tests. That is responsible opposition. That’s a responsible party representing the people of this country, unlike the Government.”

An opinion poll yesterday showed less than a third of voters who backed Remain in the 2016 EU referendum would now vote to stay in the EU.

The BMG poll said only 32 percent would repeat their Remain vote if a fresh in-or-out vote was held.

It also showed that the Prime Minister’s proposed “Chequers” deal was among the least popular options for a future relationship with the EU.

22 percent favoured a deal based on Canada’s free trade agreement with the EU while 19 percent wanted no deal.

Just 11 percent wanted the Chequers plan, the same level of support given to the so-called “Norway model” of close ties to the EU.