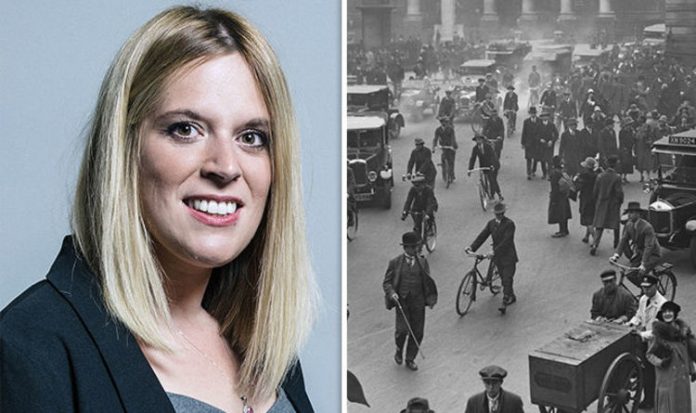 Addressing an event run by the Socialist Campaign Group, Ms Smith, MP for the swing seat of Crewe and Nantwich in Cheshire, called for a repeat of the industrial action which briefly brought the nation to a standstill in 1926.

Ms Smith, who only beat the Conservatives by 48 votes in 2017, said: “Comrades, we must topple this cruel and callous Tory government as soon as we can.

“And if we can’t get a general election we should organise with our brothers and sisters in the trade unions to bring an end to this government with a general strike.”

Mr Corbyn’s right-hand man, shadow chancellor John McDonnell, and shadow business secretary Rebecca Long-Bailey had also spoken at the event the rally – but by the time Ms Smith got up to talk, they had left the stage.

Former teacher Ms Smith won her seat with by just 48 votes from former Tory minister Edward Timpson at the 2017 election, and referred to her wafer-thin majority in her speech.

In June, she was one of six MPs who resigned from Labour leader Jeremy Corbyn’s shadow cabinet prior to a vote on a House of Lords amendment to the EU Withdrawal Bill which sought to keep the UK in the European Economic Area, explaining she was committed to taking the UK out of the EU in accordance with the wishes of her constituents in the 2016 referendum.

Her calls for industrial action contrast with official Labour policy, with the conference earlier agreeing an amendment keeping the idea of a second referendum on the table if the party cannot force a general election – with no mention of widespread industrial action.

Laura Smith has called for a general strike – the last one was in 1926 (Image: GETTY/Parliament)

Mr Corbyn – who is due to make his keynote speech to the conference today – has never explicitly called for a general strike – although he is a staunch supporter of trade unions, opposing restrictions on strikes in key areas including transport – which would have made it more difficult for tube drivers on the Piccadilly Line to stage their 48-hour walkout today for example.

General strikes are not illegal – although current laws prohibit workers from mass walkouts.

The only previous general strike in the history of the UK was called by the Trades Union Congress in solidarity with 1.2 million coal miners “locked out” of their mines by owners who wanted to reduce wages and increase the length of their working days.

An estimated 1.7 million workers, mainly in transport and heavy industry, walked out on May 3, 1926.

Jeremy Corbyn is a staunch backer of trade unions – but not a general strike (Image: GETTY)

However, the Government, led by Conservative Prime Minister Stanley Baldwin, had prepared for the drastic situation, with middle-class volunteers stepping into the breach.

After nine days the TUC concluded “the government could hold out longer than the workers”, with representatives visiting Number 10 to confirm the strike was being called off.

The Labour Party, which at the time had formed a minority government two years earlier with Ramsay McDonald as Prime Minister, did not support the TUC’s decision to call the strike because it was aware of the revolutionary elements within the union movement, and feared the damage it would do to its prospects of being returned to power.

Reigning King George V showed sympathy to the striking workers, saying: “Try living on their wages before you judge them.”

Even though Britain has not witnessed a general strike since, the country came close to a repeat on July 31 1972, when a group of shop stewards known as the Pentonville Five was jailed for refusing to obey a court order to stop picketing a container depot in East London.

Thousands of workers marched through North London to Pentonville Prison, where the men were held.

Widespread action was averted when the arrest warrants of all five were overturned within a week.

The 1970s were marked by frequent industrial action, as were the 1980s, in particular the National Union of Mineworkers strike of 1984 which saw violent clashes between miners and police.

Express.co.uk has contacted the Labour Party asking them to clarify their position on industrial action, and also Mr Corybn’s stance on the issue.