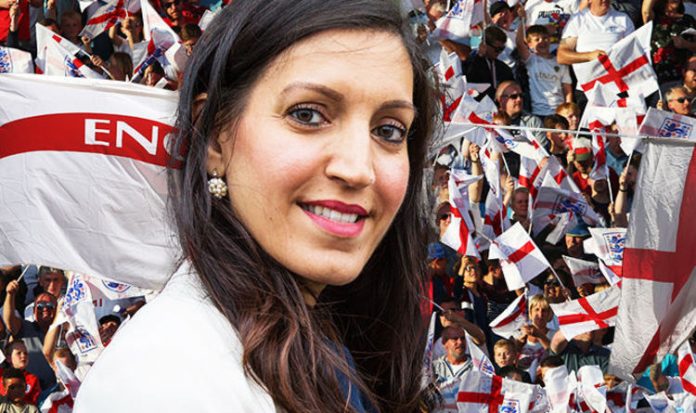 The shadow sports minister claimed football supporters were reluctant to fly the England flag because of its connotations with the far-Right and Britain leaving the EU.

Ms Allin-Khan told Westminster’s The House magazine: “I think that many people feel that flying a St George’s Cross is synonymous with far-Right ideology and that sometimes prevents them from doing so because they don’t want to be perceived as such.

“During previous World Cups between 2000 and 2010 you could walk 20 metres and see flags in windows, flags on cars, flags on shops.

“Despite more sprouting up as the tournament went on, there’s been a noticeable difference.”

She added: “I think there is a reluctance to do so because shops may not want to feel they’re not being welcoming to members of the community, and perhaps Brexit has a part to play in that.”

Her remarks not only sparked anger on social media, but also a study that found pride in the England flag had risen following the Three Lion’s semi-final success during this year’s tournament in Russia.

Alexander Hall tweeted: “You should have come round North Birmingham.

“Loads of St George flags flying from windows and cars.”

He added: “Typical London Labour bubble MP turning her nose up at patriotism.”

Fiona Mellersh added: “Hilarious. The whole country was festooned with the England flag. And England bunting.”

Another Twitter user said of her comments: “Didn’t she see the block of flats where EVERY flat had a St. George’s flag in London!

Ms Allin-Khan said in a Daily Mirror interview earlier this month that the England flag was associated with the National Front.

“Over the years, flying the flag has become more and more synonymous with the far-right – but why should they have any more right to fly the St George’s Cross than you or I?

“The English flag has become associated with the national front, the EDL and other far right groups- it frustrates me.”

She added: “It frustrates me because we have allowed this to happen.”

Fellow Labour MP Emily Thornberry was forced to resign in 2014 after appearing to mock a terraced house draped with England flags.

Taking to Twitter, the then shadow attorney general – who lives in a plush £3million London home – shared a picture of the house which had a white van outside it.

She captioned the snap ‘Image from Rochester’.