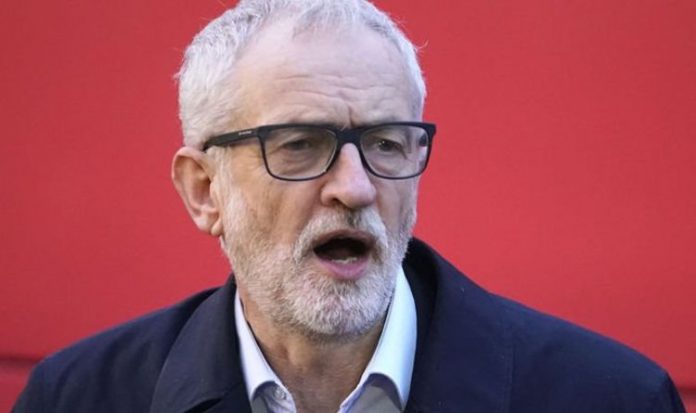 Mr Corbyn has found himself once again in the headlines despite having left as Labour leader earlier this year. It comes amid the publication of left-wing commentator Owen Jones’ book ‘This Land’. Mr Jones paints a picture of well-intended discord in which Mr Corbyn truly wanted to change the political face of the UK, yet lacked the skills to do so.

Throughout Mr Corbyn’s leadership over Labour, between 2015 and 2020, many accused Mr Jones of being a media mouthpiece for the party.

However, in an interview with the New Statesman about the book recently, he admitted that he was at times not wholly convinced with Mr Corbyn’s authority.

Several chapters linger on the party’s misgivings over the past five years, including management, anti-semitism, and Brexit.

One story about Mr Corbyn at the beginning of his leadership campaign paints an uncertain image of him.

Jeremy Corbyn: The former leader hoped he wouldn’t get elected according to a new book (Image: GETTY)

It came as Mr Corbyn made the 2015 leadership ballot in a last minute application.

Here, Mr Corbyn, talking to the former chair of the left-wing group Momentum, Jon Lansman, voiced his concern over his ballot bid.

He said: “You better make f***ing sure I don’t get elected.”

It is revealed that Mr Corbyn stood not on the belief that he could win, but out of a “sense of duty”.

JUST IN: Caroline Flint ignites Corbynistas fury as she details why party lost

General election: Corbyn and his team led the party to its worst defeat since 1935 (Image: GETTY)

Mr Jones said: “I was at the first meetings and discussions. The whole point of it was, Jeremy told me himself, ‘We’ll get 15-20 per cent’…He stood out of a sense of duty and commitment to his ideas and his cause, nobody would claim that he had natural leadership abilities, he hadn’t run anything at the time.”

When asked whether he thought this was a “bad omen” Mr Jones appeared weary of bad-mouthing the leader.

He said: “I think it was a warning that more needed to go into planning…And there wasn’t enough of that, but then there weren’t that many experienced people on the left.”

Mr Corbyn and his team led Labour to its worst defeat since 1935.

Socialism: Much of Corbyn’s manifesto sought to return the UK to a socialist form of governance (Image: GETTY)

The party also lost swathes of former mining towns and safe seats – many for the first time.

The so-called Red Wall fell, much of it turning blue, with Prime Minister Boris Johnson thanking the electorate for “lending” him their vote.

Despite the abysmal results, Mr Corbyn was recently voted the “best Prime Minister Britain never had”.

Supporters of Mr Corbyn piled in to nudge him ahead of former Liberal Democrat leader Charles Kennedy in the final vote with 57.7 percent.

The poll runs in stark contrast to the outcome found in a recent survey by YouGov, which put Mr Corbyn at the bottom of the list with a net score of -53 percent.

Sir Keir Starmer, Labour’s new leader, has attracted less attention than his predecessor but has faced similar opposition to his leadership.

There, they issued the former Shadow Brexit Secretary a warning via a homemade banner: “65,000 DEAD. DO SOMETHING!”

The protestors were enraged over what parts of the Labour Party have described as a submissive response to Mr Johnson’s handling of the coronavirus pandemic.