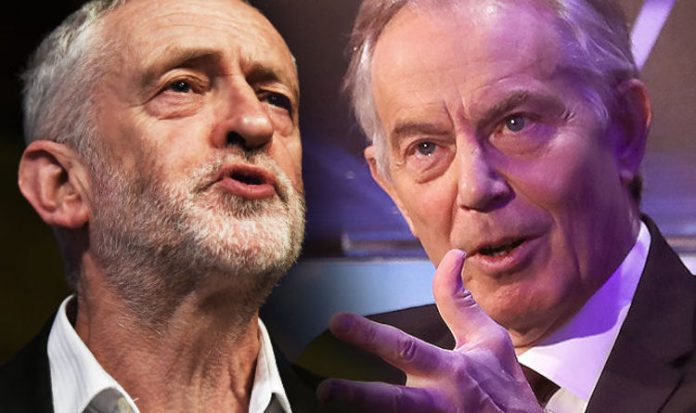 Speaking to the BBC’s Nick Robinson, Mr Blair said: “I’ve been a member of the Labour Party for over 40 years.

“You do feel a strong loyalty and attachment, but at the same time it’s a different party.

“There’s lots of people associated with me who feel that the Labour Party’s lost, that the game’s over. I’m kind of hoping they’re not right.”

The former Labour leader has been a long-standing critic of Mr Corbyn’s leadership, warning the party risked “annihilation” if he was elected.

Mr Blair also criticised Mr Corbyn over the on-going anti-semitism row within the Labour Party, saying the situation was “ghastly” and a “matter of great sadness”.

The former Prime Minister said the row was “something that I just can’t imagine ever having happened in the Labour Party that I joined”.

He added: “I can’t imagine that we have had three to four months debating over something where we have profoundly insulted the Jewish community in our country.”

Asked about his predecessor’s comments, the Labour leader added: “I’ve been in the Labour Party all my life. I am a socialist. I am determined to see a fairer and more equal society.

“It’s not personal, it’s about us as a movement. That’s why we were founded. That’s why the party is so big. And that’s why I’m so confident that we are continually challenging this Government and we will win a general election.

“I don’t think the British people will tolerate a situation where, for example, the choice at the next election is Boris Johnson versus Jeremy Corbyn.

“But I just don’t believe people will find that, in the country as a whole, an acceptable choice. Something will fill that vacuum.”

Under Mr Blair, the party’s membership peaked at 405,000 before dropping to 198,000 when he stepped down from the Government.

However, Labour backbencher, Chris Williamson, hit out at Mr Blair’s comments, saying that the Labour Party is now more united than ever.

He told BBC’s Radio 4’s Today programme: “I don’t really understand what Tony is talking about, the Labour Party now has never been more united.

“We achieved nearly 13m votes in the last election and we are giving hope to millions of people who had become really cynical about politics and inspiring people in a way that I never witnessed in my 42 years as a Labour Party member. So I think the party is going frankly from strength to strength.”