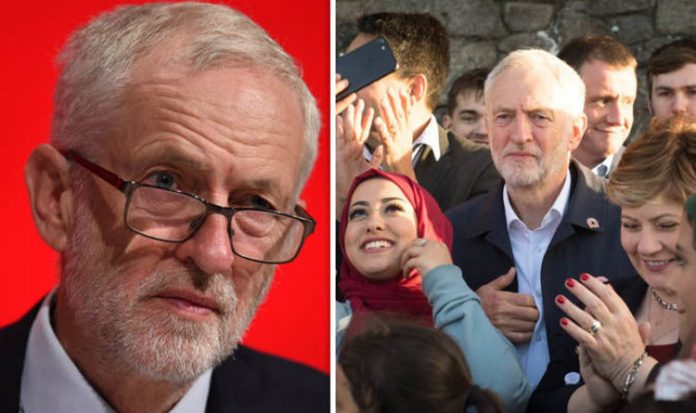 The Labour leader was stopped by Miko Peled, a controversial activist, outside the party’s annual conference in Liverpool on Sunday evening.

Speaking at the 2017 Labour conference, he said: “This is about free speech, the freedom to criticise and to discuss every issue, whether it’s the Holocaust – yes or no, Palestine, the liberation, the whole spectrum.

“There should be limits on the discussion.”

Following his encounter with Mr Corbyn on Sunday, Mr Peled posted a photo of the two on Twitter, and wrote: “Brilliant to see the courageous Jeremy Corbyn accessible, gracious and generous on the street with the people.”

Mr Peled was nevertheless denied access to the conference, and encountered Mr Corbyn on the perimeter of the event grounds.

“He does not have a pass and has not been inside conference.

“The event is not being advertised by the Labour Party and is not taking place on the conference site.”

The spokesman also denied Mr Corbyn intended to pose for the picture with Mr Peled, or endorses his views.

He added: “Jeremy has stopped by hundreds of people in Liverpool over the last few days.”

Mr Corbyn nevertheless drew sharp criticism from leading Jewish figures, who accused him of stoking concerns of anti-Semitism within the Labour Party.

Karen Pollock, the director of the Holocaust Education Trust, said: “This is precisely the sort of thing that gives every signal that it is free rein for anti-Semites in the Labour Party.

“Why would a political leader who claims to have been against racism all of his life want a picture with him?”

Mr Corbyn caused further outrage on Tuesday, after suggesting the police protection provided to a Labour Jewish MP at the conference was unnecessary.

Questioned whether he was worried that Luciana Berger had to be escorted by police to an event on Monday, Mr Corbyn said: “There is no threat being made in this conference to anybody.”