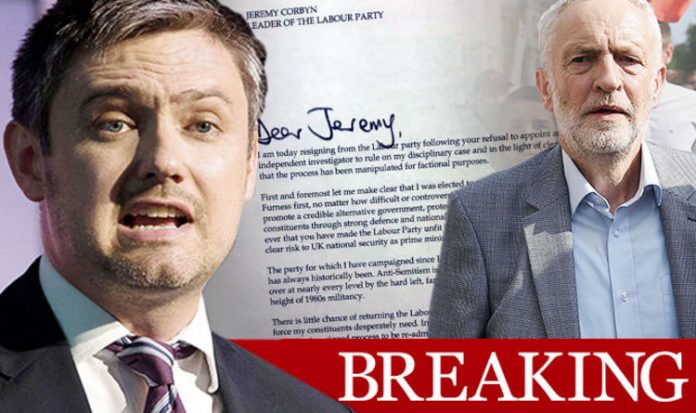 Mr Woodcock, 39, sent his scathing resignation letter to the embattled leader this morning, where he told Jeremy Corbyn he had made the Labour Party “unfit” to carry out its job.

He said that under Mr Corbyn, Labour was no longer “the broad church it has historically been” and there was little chance of returning it to an “inclusive, mainstream electoral force”.

The shock resignation comes after the Labour MP was suspended from the party in April following claims he sent inappropriate texts and emails to a former female staff member between 2014 and 2016, which he denies.

The MP for Barrow and Furness said his decision had been taken after Labour’s “refusal to appoint an independent investigator to rule on my disciplinary case”.

Mr Woodcock, a long time critic of Mr Corbyn, strongly denies the claims, which are still under investigation by the Labour Party.

He said there was “clear evidence that the process has been manipulated for factional purposes”.

He wrote: “I have promised to fight for local jobs, promote a credible alternative government, protect the shipyard and ensure the safety of my constituents through strong defence and national security.

“I now believe more strongly than ever that you have made the Labour Party unfit to deliver those promises and would pose a clear risk to UK national security as Prime Minister.”

Mr Woodcock said Labour had been “taken over” by the “hard left” and accused it of “tolerating” anti-Semitism.

He used the letter to attack the direction of the party under Mr Corbyn’s leadership, saying: “The party for which I have campaigned since I was a boy is no longer the broad church it has always historically been.

“There is little chance of returning the Labour party to the inclusive, mainstream electoral force my constituents desperately need.”

Mr Woodcock said he would stand as an independent, where he would be prepared to vote with the Conservative Government when he agreed with its policies.

He wrote: “There is still so much to do and I will continue to give my all to the people of Barrow and Furness as an independent MP on the opposition benches.

A former aide to Gordon Brown during his time as prime minister and shadow transport minister under Ed Miliband, Mr Woodcock has been one of the harshest internal critics of Mr Corbyn’s leadership of Labour.

He clashed with Mr Corbyn over his stance on nuclear weapons and anti-Semitism.

And in 2017 he stood for re-election in the Cumbria seat he has represented since 2010, but said he did not believe Mr Corbyn was fit to serve as prime minister and would not countenance voting to put him into 10 Downing Street.

A Labour spokesman simply said: “Jeremy thanks John for his service to the Labour Party.”

The resignation is the latest crisis to hit Mr Corbyn after he was branded an “anti-Semite and a racist” by a veteran Jewish Labour MP Dame Margaret Hodge after the Labour Party rejected an internationally acknowledged definition of anti-Semitism.