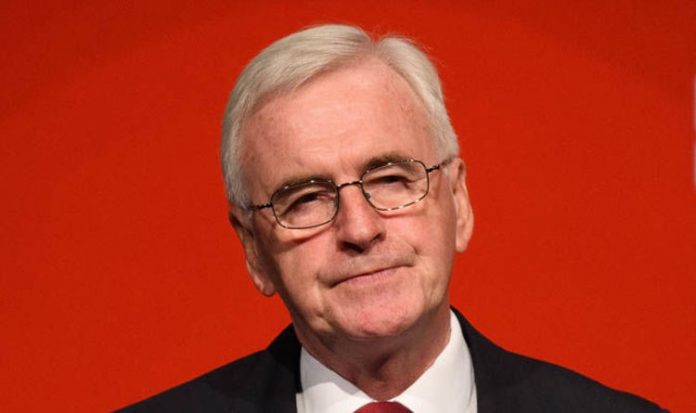 The Confederation for British Industry and other employers’ organisations raised the alarm about the potential for economic mayhem under a Jeremy Corbyn-led government after proposals for the biggest nationalisation drive in the country’s history were unveiled at the Labour conference yesterday.

John McDonnell told the gathering in Liverpool of his “radical” ambitions for seizing control of Royal Mail, the railways and the water and energy and energy industries.

“It’s time to shift the balance of power in our country,” the shadow chancellor said.

Claiming Labour was “ready to build the future,” he added: “We’ll be proud to call that future socialism.”

Low-tax campaigners said his hard-Left blueprint would mean “abject misery for families and businesses” while the Tories calculated his proposals could cost households more than £2,000 a year in higher utility bills.

Business groups warned the “ideological” plan would scare off investors and lead to a “double whammy” on savings and pensions due to a collapse in share values.

Mr McDonnell set out his 1970s-style socialist plan to transform the economy in a five-year term in office in his keynote speech to the Labour conference.

He claimed the party was “ready” for a general election and to implement a “radical” economic programme.

“At the heart of our programme is the greatest extension of economic democratic rights that this country has ever seen,” he said.

Mr McDonnell promised measures to force large companies to give a third of seats on company boards to employees and pay profit dividends to staff.

He added: “We are extending economic democracy even further by bringing water, energy, Royal Mail and rail into public ownership.”

Labour’s plans would be far more radical than the nationalisations of the 1960s and 1970s because they would put workers and local councils in charge of public services, the shadow chancellor claimed.

He added: “Nationalisation will not be a return to the past. We don’t want to take power away from a faceless directors to a Whitehall office, to swap one remote manage for another.”

Vowing to take the water industry back under state control, he promised “a new publicly-owned water system that puts this essential service back in the hands of local councils, workers and customers”.

Details of the plans for the industry showed that staff would keep their jobs “except for senior executives and directors, whose posts will be re-advertised on dramatically reduced salaries capped by our 20:1 pay ratio policy”.

Shareholders would be compensated by being given “bonds” at a value decreed by Parliament, the plans added.

Mr McDonnell pointed out to the conference that this year marked the 100th anniversary of Labour adopting the Clause Four pledge “to secure for the workers, by hand and brain, the full fruits of their Labour” that was discarded under Tony Blair’s leadership.

He added: “I say the Clause Four principles are as relevant today as they were back then – fair, democratic, collective solutions to the challenges of the modern economy.”

Mr McDonnell also promised a widespread extension of trade union power in the workplace, insisting: “Wages will be determined to sectoral collective bargaining.”

Confederation for British Industry director-general Carolyn Fairbairn led the chorus of concern about the plans from business leaders yesterday.

She said: “With Labour’s current proposals, the fallout for the UK, its workers and customers would be a drop in living standards.

“From renationalisation to dilution of shares, Labour seems determined to impose rules that display a wilful misunderstanding of business.

“Their policies would immediately reduce the value of shares owned by ordinary people by over 10% and hobble UK ambitions to compete on a global stage. That’s a double whammy for people’s pensions and savings.

She added: “Firms urge Labour to open their eyes and work with them to move forward, rather than blocking progress through blind ideology.”

Adam Marshall, director-general of the British Chambers of Commerce, said: “Let no one be fooled, Labour’s proposals are both a tax grab and an unprecedented overreach into the way many of our businesses are run and will raise serious concerns.”

He added: “The call for wholesale nationalisation could put investment in a deep freeze at precisely the time we want to be encouraging investment in the economy.

“Why would investors here in the UK, and even more worryingly in boardrooms across the world, choose to put a penny into Britain in the knowledge that their shareholdings will be diluted, and their boards will be subject to significant government interference?”

Analysis by the Tories, based on the economic effect of an energy nationalisation programme in Germany, estimated that average household utility bills would rise by £200 a month.

Chancellor Philip Hammond said: “John McDonnell showed yet again that Labour don’t know how to handle the economy and have no idea what their plans would cost.

“Labour’s plan to put politicians in charge of crucial industries means there would be nowhere to turn when things go wrong. They aren’t fit to govern and, just like last time, it’s working people who would pay the price.”

“Taxes are already at their highest level in nearly half a century, and even more punishment taxes will actually mean less cash for public services.

“The dangerous policy of seizing control of industry by the back door and nationalising everything they can get away with is a sure-fire way to scare off exactly the investment that Brexit Britain will need to thrive.

“Instead of hurting the poorest by undermining public services and damaging the businesses that employ them, McDonnell should embrace policies that will grow the economy by trusting individuals and entrepreneurs to spend their money better than any politician ever could.

“This speech shows that he doesn’t understand how his ideology will hurt people in the real world – and only cares about the failed ideas of the past, rather than helping the taxpayers of today and tomorrow.”

Michael Roberts, chief executive of Water UK, said: “At the moment there’s a well-run water industry that’s delivering lower bills, increasing investment, and which has cut leakage by a third over the last 20 years. To replace managers who have decades of experience in running successful water companies, and put much needed investment at risk by handing the industry over to politicians, risks years of chaos in an essential public service.”