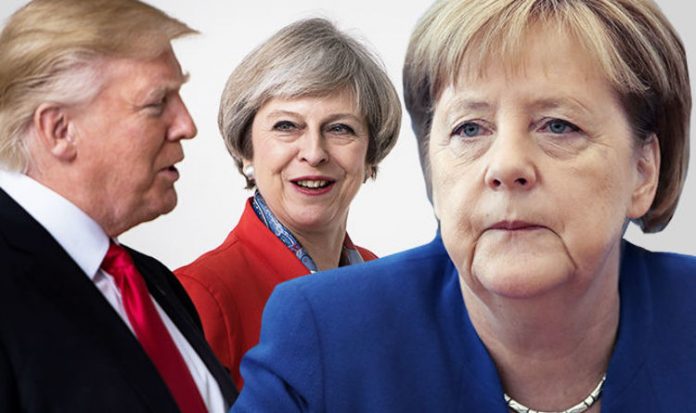 Demand for German products are down and export forecasts have also been lowered as the impasse in Brexit talks clouded the outlook for Europe’s biggest economy.

The Federation of German Industries (BDI) group said the German economy is now expected to grow by 2.0 percent this year, down from a previous estimate of 2.25 percent.

Exports will rise by 3.5 percent in real terms, below the BDI’s initial forecast of five percent, the group added.

BDI president Dieter Kempf said: “The trade policy of US President Trump, but also the approaching Brexit are dampening investment activity worldwide and with it German export business.”

The UK is Germany’s fifth most important export destination.

The BDI’s forecast came as Labour refused to rule out the possibility of backing a second Brexit referendum.

Sir Keir Starmer, the party’s shadow Brexit secretary, said Labour had a “duty” to stop Britain leaving the EU without a trade deal.

8:42am update: Theresa May to push for US trade deal

Theresa May will push for a strong trade deal with the US after Brexit when she meets Donald Trump in New York.

The Prime Minister is holding talks with the president on Wednesday on the fringes of the United Nations General Assembly.

Downing Street sources said the one-on-one discussion will focus on future trading relations between Britain and the United States.

Their meeting is one of the final engagements on Mrs May’s schedule during the two-day trip.

8:33am update: Retail giant Next planning for no-deal

Retail giant Next has warned over the threat of port delays and increased tariffs from a no-deal Brexit.

The high street chain said it was “well advanced” in its preparations in case a free-trade agreement is not in place by next March.

It warned the biggest risk to the business was the likelihood of delays at UK and EU ports, along with a sharp fall in the value of the pound.

The group also called on the Government to ensure that customers’ procedures at ports are not affected in the case of a no-deal.

But it said the no-deal risks do not pose a “material threat to the ongoing operations and profitability” of Next in the UK or EU.

He said: “No deal means at midnight in March we rupture our trading arrangements and this will cost jobs, I don’t doubt that the pound will begin to drop.

“We won’t have any arrangements for security and counter-terrorism – the idea that we wouldn’t have an arrangement in place for that would horrify people.

“And frankly this idea that we might have medicines stockpiled for six weeks has spooked people.

“We don’t want to face that situation and we have got a duty to do something to stop it.