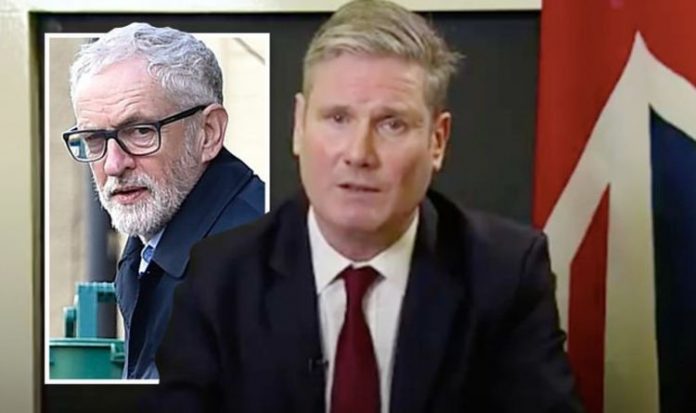 Jeremy Corbyn slammed for ‘sneering’ at patriotism by MEP

A leading trade unionist and Labour member told Express.co.uk that opposition party MPs had for too long sneered at patriotism among Britain’s working classes. Labour’s new leader, Sir Keir Starmer, appears to have got on board with this gap in the party’s membership. He is now attempting to rebrand Labour as the “patriotic party”.

Not since Tony Blair – the party’s former leader who dominated British politics for ten years – has the party focused on patriotism.

And even then, as Paul Embery, the trade unionist notes, being proud of Britain was not at the forefront of New Labour’s agenda.

In recent years, he said the party had become more overt in its wariness to “any expression of national identity”.

This failure has ultimately led to Labour losing its so-called Red Wall seats.

Mr Embery said: “There’s this kind of thing that, any expression of national identity, particularly English identity, many Labour MPs think is associated with the days of Empire.

Jeremy Corbyn: The former leader and his allies were slammed for sneering at patriotism (Image: GETTY)

Corbynites: The former leader was booted out of the party following a report into anti-semitism (Image: GETTY)

“Most ordinary working class voters are patriotic simply because they have an affection for their country, not because they’re secretly imperialists or white supremacists who want to march around the world and rape and pillage.

“And I think that was part of why this chasm has emerged, without question.”

Keir Starmer: The Labour leader has appeared in front of a Union Jack in recent speeches (Image: Twitter/@Keir_Starmer)

His comments ring true of many of former leader Jeremy Corbyn’s allies, a number of whom turned their noses up at the Union Jack and the cross of St George.

Emily Thornberry – a staunch Corbynite and Remainer – the current Shadow Secretary for International Trade, famously resigned from Labour’s frontbench in 2014 after posting a “snobby” tweet.

It came as she visited Rochester during a by-election, and posted a photo of a new-build home with a white van parked outside it and a St George’s flag flying from the window, with the caption: “Image from #Rochester.”

The man who owned the home, Dan Ware, later spoke to , and said: “We put the flags up for the World Cup (in 2014) and will continue to fly them.”

A car dealer, Mr Ware said he would never vote for Labour in the future, adding that it did not “matter” who was in Government.

Gordon Brown: Then PM, Brown was challenged by local Gillian Duffy – he called her a ‘bigoted woman’ (Image: GETTY)

He added: “I think they (Labour) need to get out of their mansions and visit the working class. Her and Ed (Miliband) should come and say sorry to me.”

While visiting Rochdale in 2010 he branded a lifelong Labour supporter a “bigoted woman” after she challenge him on immigration and the economy.

His words were streamed live after he forgot to remove the microphone given to him by Sky News.

Mr Embery says that although these are isolated incidents, they represent a much bigger trend that has taken hold of the Labour Party.

Brexit: Starmer has flip-flopped on his Brexit rhetoric over the years (Image: Express Newspapers)

Steven Fielding, Professor of Political History at the University of Nottingham, told Express.co.uk that Sir Keir was moving strongly to rectify this.

He said this came most recently in the form of the Labour leader promising to decentralise power and thus embolden the country’s “One Britain” image, including holding on to Scotland.

Prof Fielding explained: “Of course, it’s in Starmer’s best interests to try to win back Scotland and prove Labour is serious about power there, but these devolution proposals are also a kind of middle-way for all of the nations.

“He is saying, ‘We’ve seen what centralisation does in a crisis, look what Boris Johnson has done, we need more devolution in England so we can deal with problems more specifically’.

“There’s an argument that if local councils had got more powers, and that if the central Government had trusted them with more power, then Covid wouldn’t be as bad in some places as it currently is.

“Starmer’s argument is that if we don’t say we’re going to devolve power, as a kind of way to keep the Scots in the union, they’re going to leave.

The Labour leader has several times addressed the issue of patriotism and nationalism, using the buzzwords “history, values and identity” to deliver his argument.

In a speech last year, Sir Keir said: “I don’t believe in putting up borders across any part of our United Kingdom, in dividing people, communities and families who have stood together for so long.

“I believe in that core Labour principle that we achieve more together than we do alone.

“All four nations, working together to build a more open, more optimistic and outward-looking country.

“A United Kingdom that’s a force for social justice and a moral force for good in the world.”