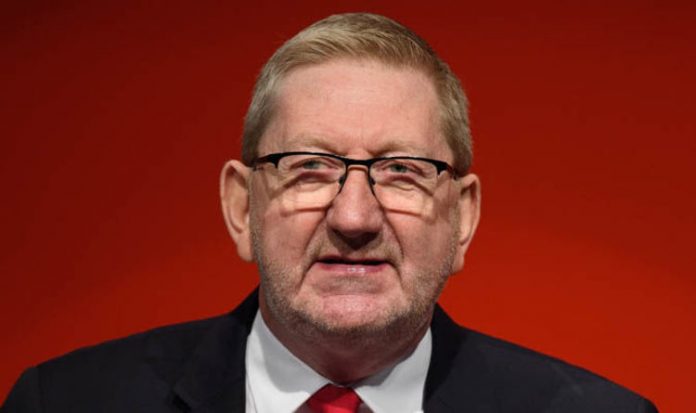 The general secretary of Labour’s biggest single donor, got a standing ovation from party conference delegates in Liverpool for his speech demanding unity from MPs to make Jeremy Corbyn Prime Minister.

He said the party was weathering “the smears and the sneers from the media – and some who should know better”.

Voters were desperate for an end to Tory government and backed Labour’s agenda, he said.

“Wouldn’t it be great, comrades, if all our party, from top to bottom, was united in promoting our alternative?

“I’m not talking about an unthinking agreement on everything or blind loyalty.

“But I am talking about some MPs turning into an echo chamber for whatever line of attack the Tories and the press are deploying against us,” he complained, to cheers and applause from delegates.

People’s views should be heard – but he went on to even more enthusiastic cheers: “Anyone screaming ‘you are a racist’ at Jeremy Corbyn has lost every sense of moral proportion, every shred of decency as well.”

That was seen as targeted at Labour MP Dame Margaret Hodge, who in July angrily told Mr Corbyn he was an “anti-Semite and a racist” as he resisted adopting an international definition of anti-Semitism.

Mr McCluskey went on:  “It’s time for all of us, each and every one of us, to speak up for our leader – the most decent and principled man in politics today.

“He should not have to face these attacks alone –  and while Unite is here and good comrades like you, he never will have to.”

He also warned against heeding “siren voices” in the party backing a breakaway movement.

Referring to the Daily Express’s revelation last month about anti-Corbyn MPs including Chuka Umunna holding secret meetings at a luxury bed and breakfast in Sussex to discuss Labour’s future, he declared: “If the centre ground is fighting for a better deal for working people and protecting our communities, look no further.

“So Chuka, drop the country club plotting. Listen to working people the length and breadth of the country.

“Get behind the party that made you and join the rest of this movement in fighting to get rid of this rotten government, to give our country the fresh start it needs and to make Jeremy Corbyn the people’s Prime Minister.”

Mr Umunna Tweeted in response: “I’ve said it before and I’ll say it again: I stand by what I’ve said on bullying and racism in the Labour Party and won’t be bullied into silence by anyone,not least because my family have experienced racism too.

Dame Margaret also hit back, Tweeting: “It isn’t immoral or  indecent to point out that too little has been done to eradicate Anti-Semitism in the Labour Party.

“It is immoral and indecent to ignore it and to attack those who call it out. Enough is Enough.”

Footage later emerged of Mr McCluskey in a confrontation with a Jewish campaigner as he arrived to speak at a pro-Palestinian fringe meeting in Liverpool on Sunday night.

He said he now realised the phrase was “taken as offensive” because it wrongly seemed to minimise a prejudice he had “fought against all my life”.

Officials moved to guide him into the meeting but he marched back to the activists when they asked why Labour was “institutionally racist”. Angrily jabbing his finger, he told them: “Hey, if you want to talk about institutional racism, go to the Tories because they’re the institutional racists.”

The episode ended when officials again guided him into the building to speak at the meeting, where he defended people’s rights to criticise Israel as an “apartheid state”.