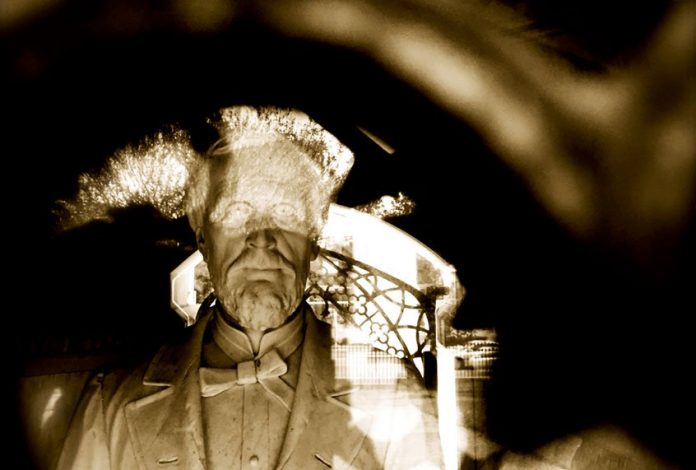 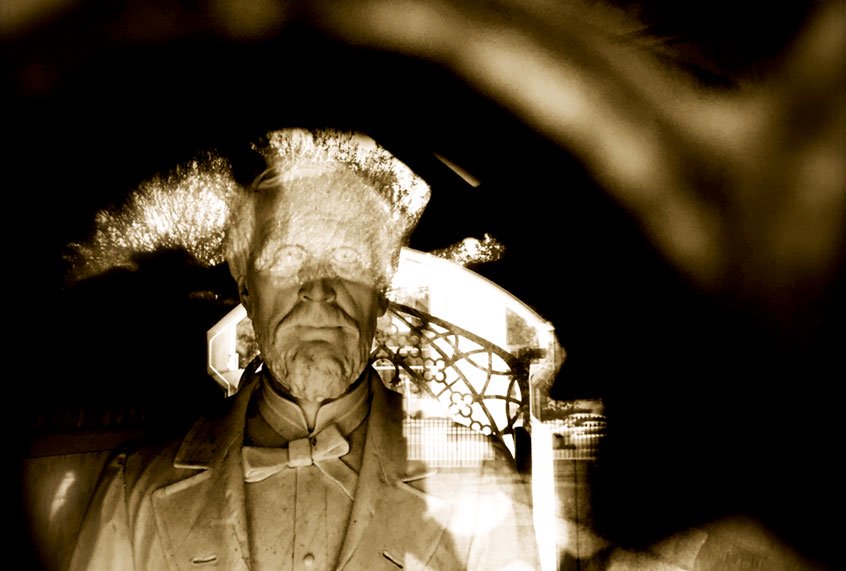 An Italian marble likeness of Jefferson Davis stands within an iron-gated cage on the grounds of the Old Capitol Museum in Jackson, Mississippi. The Mississippi Confederate Monument was built as a crypt for “the most famous son of Mississippi.” The president of the Confederacy was actually buried in Richmond, the capital of that secessionist pseudo-republic, but the crypt in Jackson was erected in 1891 to house Davis’ symbolic body, while also memorializing the other Mississippians who died as “martyrs of their creed.” The four sides of the crypt were left open, so the public could step inside and inspect the effigy. One of Davis’ hands was chopped off a few years following the dedication. Soon the statue had been repeatedly “mutilated,” as one newspaper reported in 1923.

When I was home visiting my family in Mississippi recently, I found the statue of Davis to be in immaculate condition. Through the iron filigree, the gossamer figure stood regal in bow tie and tailored coat, his form strikingly reminiscent of a whitewashed Frankenstein.

The history of the Davis statue is one of repetitive repair, the effort so relentless the state ultimately had the statue locked up for its own protection. Glass behind the iron bars adds an otherworldly glare to the spectacle. The encasement suggests that something within that crypt is seriously contagious.

The many restorations had created a monster. Rather than protecting the statue, the entombment now illustrates the massive effort it took to contain whatever Jefferson Davis and his creed might, at least symbolically, still stand for. Something sinister was locked away not only within our history, but also within the ongoing nature of being human. Some threat is still here.

The small park set around the Davis crypt is a pleasant square, with manicured lawn and well-tended trees. The hulking crypt disrupts the peaceful setting. Of course, some visitors may see the crypt-themed monument as a symbol of tenacity to the point of martyrdom. Many others might recognize it as a rallying marker of white supremacy. The perspectives would likely skew toward an urgent desire to bulldoze the structure, smooth the ground and plant pleasing turf instead. Yet what I saw behind the bars was evil. The encrypted effigy gives evil a form that suggested it once was and might still be human. The iron bars hold the lesson, not from the past but for the present.

In the early 1900s, Sigmund Freud asked the philosopher Carl Jung for help in understanding the role of symbols in human nature. Jung answered with an opinion: “Symbol formation, it seems to me, is the necessary bridge to the rethinking of long familiar concepts.”

Rethinking the innumerable Confederate symbols throughout our nation is the charge of a long-overdue enlightenment. Abolition of the statues can feel exhilarating to the removers, and encouraging to those of us who share their perspectives. Still, too much cleansing can prompt forgetfulness, even a sense of perfection. A beautiful lawn may well reflect the achievements of an enlightened world, but it offers no reminder of our ongoing vulnerability to the contagion of a dehumanizing creed.

In this sense, Mississippi’s iron-barred imprisonment of Jefferson Davis presents a unique example. Rather than removing all the statues, perhaps we should entomb the key offenders in place within firm structures, locking them away forever in a readily visible spot. Of course destruction would be easier, but widespread destruction of offensive symbols risks creating a symbol of destruction itself — and perhaps a more dangerous symbol, given a superficially pleasing replacement. Archival of these figures within museums seems a wise compromise, but the stuff inside a museum is all too easily avoided. As is the museum itself. To dethrone an effigy from its pedestal and imprison it on the public square leaves a hard lesson. No longer would the monument stand as a memorial to a cruel creed. Instead, the reconfiguration would stand as evidence of the effort it takes to keep some human potential for evil contained.

READ  Brexit news: May REFUSES to answer questions on benefits WITH or WITHOUT exit deal | Politics | News - UK

In his letters to Freud, Jung expresses dismay at the behavior of Americans. “American culture really is a bottomless abyss,” he writes, adding that “such conditions have never existed in the world before.” If Jung was correct, a record of American thought and deed is important to preserve as a rethinking tool, with the most important lessons tactfully displayed in some public squares.

You can touch the iron bars in Mississippi. You can look through the glass that conceals Jefferson Davis, and sometimes see yourself in the reflection. When I was there, it felt good to walk away from this monstrosity. I felt a great freedom in that decision, even if the lesson of the crypt says I was only out on probation.

The post Jefferson Davis behind bars: Lessons from a locked-up Confederate appeared first on Salon.