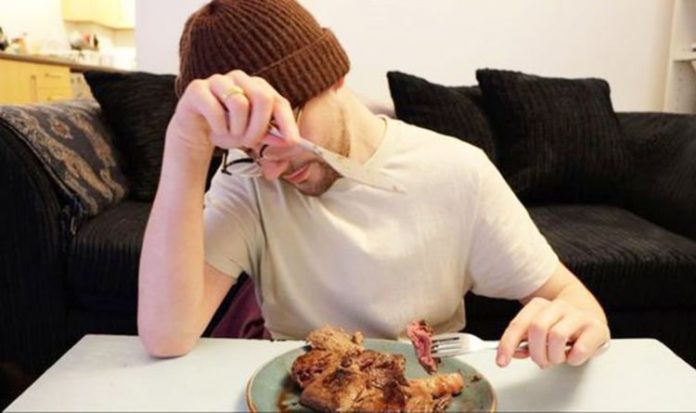 The Deluxe Cowboy steak is produced in the UK from British beef. It is dry aged on the bone for 14 days and further matured to 21.

A generous marbling throughout the steak also helps with the flavour and tenderness – giving shoppers a taste of restaurant quality food from the comfort of home.

Harry attempted to buy a Deluxe Cowboy Steak whilst shopping in Hackney, but to his disappointment he was told the store didn’t stock them.

In an attempt to salvage his mammoth food challenge, he purchased 1kg-worth of smaller rump steaks – four steaks in total.

Harry Walker wrote about his ordeal in an article ‘I tried to eat 1kg worth of steak from Lidl and thought I was going to die’ for My London.

He said: “I felt disappointed for a second, but then I realised: I might not be able to get the steak itself, but I did know how much the steak was supposed to weigh.”

Once home, Harry Walker cooked and rested all four steaks. He then stacked the steaks on his plate ahead of his eating challenge.

In the end, Mr Walker only managed to eat two steaks – around 500g.

Despite not successfully completely the eating challenge Harry Walker told My London that he was not disappointed by his efforts.

Next time you’re in Lidl for some essential shopping see if you can spot the sharing steak everyone is talking about.