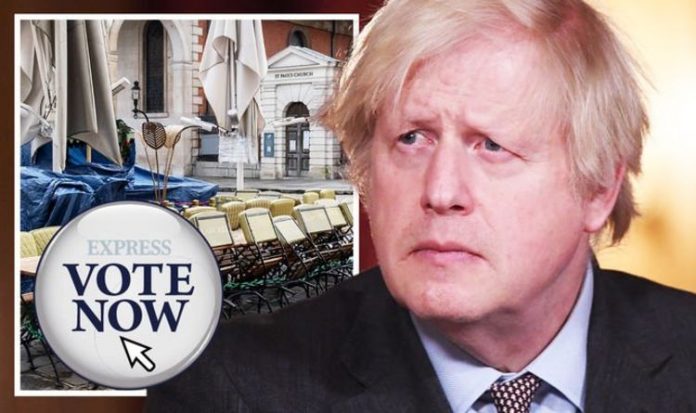 Mr Johnson will unveil his proposals to ease restrictions on February 22 and said he hoped to be able to set out some dates when he makes his announcement. The Prime Minister is facing pressure from some quarters to set out a swift easing of the lockdown on the back of a successful rollout of vaccines with Easter Sunday falling on April 4 this year.

But he warned: “We’ve got to be very prudent and what we want to see is progress that is cautious, but irreversible.

“If we possibly can, we’ll be setting out dates.

“If because of the rate of infection, we have to push something off a little bit to the right – delay it for a little bit – we won’t hesitate to do that.”

Mr Johnson continued: “The risk is that if you have a large, as it were, volume of circulation, if you’ve got loads of people, even young people getting the disease, then a couple of things happen: first of all, you have a higher risk of variants and mutations within the population, where the disease is circulating.

“Secondly, there will also be a greater risk of the disease spreading out into the older groups again.

“Although the vaccines are effective and great, of course, no vaccination programme is 100 percent effective, so when you have a large volume circulating, when you have got a lot of disease, inevitably, the vulnerable will suffer.

Scientists have warned lessons must be learned from the “mistakes” made previously in relaxing lockdown measures too fast.

A number of experts have called for a cautious approach to next Monday’s Downing Street announcement.

Professor Neil Ferguson, who advises the Government as part of the New and Emerging Respiratory Virus Threats Advisory Group (Nervtag), said: “We have results from scientific studies, clinical trials, but the real world is a different thing and so, again as the Government has said, we need to see how much protection vaccinated people have, how quickly death rates come down before we can be completely confident about going that next step and really reopening.”

Prof Ferguson said he was “encouraged” by the Government’s “cautious strategy” to date.

He said: “The thing we don’t want to repeat is what has happened on previous occasions – namely relaxing too fast.”

The warnings come after Tory MPs from the lockdown-sceptic Covid Recovery Group (CRG) called on Mr Johnson to commit to a timetable for lifting restrictions with a complete end to controls by the end of April.

In a letter to the Prime Minister, CRG leaders said the “tremendous pace” of the vaccination rollout meant restrictions in England should begin easing from early March.

They said ministers must produce a cost-benefit analysis to justify any controls that remain in place after that date, with a “road-map” stating when they would be removed.

The letter was organised by the CRG chair and deputy chair, Mark Harper and Steve Baker, and was said to have the backing of 63 Conservative backbenchers in all.