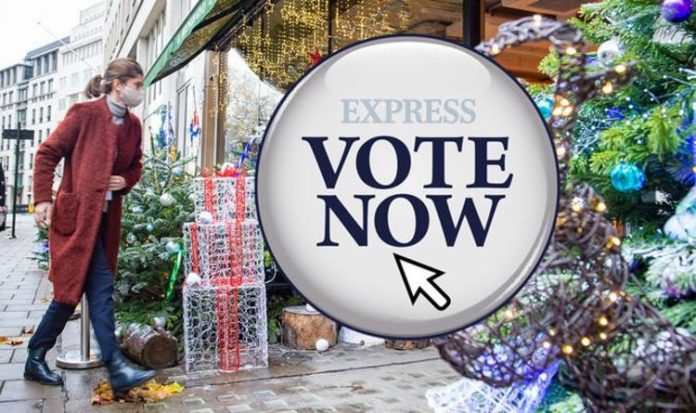 Tier 3 areas in London and the South East will be moved into a new Tier 4 – effectively returning to the lockdown rules of November. The restrictions mean non-essential shops, gyms, cinemas, hairdressers and bowling alleys will be forced to close for two weeks while people will be restricted to meeting one other person from another household in an outdoor public space.

People in areas of England not moved into Tier 4 will also face disruption to their Christmas holiday plans.

The Government’s “Christmas bubble” policy which would have allowed up to three households to meet up between December 23 and 27 has been dramatically scaled back and now applies only to Christmas Day.

Mr Johnson said he was introducing the new restrictions “with a very heavy heart”.

He said: “I know how much emotion people invest in this time of year, and how important it is, for instance, for grandparents to see their grandchildren, for families to be together.

“So I know how disappointing this will be.

“But we have said throughout this pandemic that we must and we will be guided by the science.

“When the science changes, we must change our response.”

The Prime Minister was advised of the group’s conclusions at a meeting with ministers last night and the new regulations were signed off by the Cabinet in a conference call on Saturday lunchtime.

Cabinet Office minister Michael Gove has briefed the devolved administrations for Scotland, Wales and Northern Ireland on the group’s findings.

He said: “Without action the evidence suggests that infections would soar, hospitals would become overwhelmed and many thousands more would lose their lives.

“Yes, Christmas this year will be different, very different.

“We’re sacrificing the chance to see our loved ones this Christmas so that we have a better chance of protecting their loves, so that we can see them at future Christmases.

“And as sure as night follows day we will beat this virus, we’ll defeat it and reclaim our lives.”