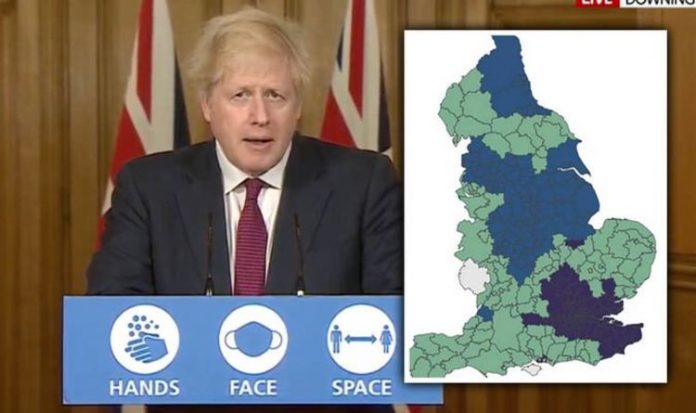 Thousands of people will be unable to see family or friends this Christmas as Brois Johnson announced a new Tier 4 lockdown for swathes of the south eats of the UK. The new rules, which will see Christmas cancelled for those now in the highest tier, will be introduced from Sunday morning. Speaking at a Downing Street briefing on Saturday, he added that people will be asked to stay at home and work from home if they can.

The rules also mean you must not enter or leave Tier 4 areas, not stay away from home overnight and can only meet one person from another household outside in a public space.

He also said that non-essential retail, indoor gyms and leisure facilities in these areas will close.

Mr Johnson added: “We will introduce new restrictions in the most affected areas, specifically those parts of London, the south-east and east of England which are currently in Tier 3.

“These areas will enter a new Tier 4.

“Residents in those areas must stay at home apart from limited exemptions.”

READ MORE: Tier 4 rules: What are the Tier 4 restrictions?

The rules state that people in areas in Tier 4 must stay home, making to the national lockdown saw in England in November.

The Prime Minister said: “We are sacrificing the chance to see our loved ones this Christmas so we have a better chance of protecting their lives so that we can see them at future Christmases”.

He added that he “bitterly regretted” the changes to the Christmas arrangements, saying: “Alas, when the facts change you have to change your approach.

“The briefing that I had yesterday about this mutation of the virus, particularly about the speed of transmission, was not possible to ignore.”

The changes come after a new strain of the Covid virus was discovered in the south east.

Professor Chris Whitty said there had been a “really dramatic increase in the proportion of cases” seen with the new variant.

Screening tests suggested that in the South East 43 percent of the virus was now the new variant, in the East of England it is 59 percent and in London 62 percent.

He said: “Those have gone up very, very fast over the last few weeks.

“This has really gone incredibly quickly. They are much lower in other areas of the country.”

Sir Patrick Vallance said hospital admissions per day from September to now had gradually increased, with a “very sharp increase” during December.

“This virus has taken off, it’s moving fast and it’s leading inevitably to a sharp increase in hospital admissions,” he said.

But he added there was no evidence that the new variant “causes more trouble” and would make people sicker.

The rules change has sparked a furious reaction on social media, with many worried about their mental health during what is effectively a third full lockdown for these affected by Tier 4.

One said: “If you thought mental health was down the toilet during the previous lockdowns, imagine what this is going to do to some people. It’s so worrying and scary.”

A third posted: “I’d be so surprised if this new guidance does anything. It’s too late. There’s such apathy and mistrust anyway.

“Tickets home will have been booked, plans made, food purchased all based around the last guidance. I hate it here.”

Mayor of London Sadiq Khan said: “These further restrictions are a bitter blow for Londoners who were hoping to spend time with loved ones safely this Christmas, and for businesses who have already suffered so much this year.

“London faces its toughest Christmas since the war and the whole city will need to pull together to see us through this terrible period.

“Implementing restrictions is not enough – it is imperative that the Government vastly increase mass testing as a matter of urgency.

“The Government needs to put in place a compensation scheme for all lost income for the festive period, as well as a package of full pay for those who are required to self-isolate.

“Face coverings should be made mandatory in all busy outdoor public places.

“London and the country are paying the price for the Government’s continued failure to get a handle on the pandemic. This continued chaos and confusion could all have been avoided had the Government not made irresponsible promises to the public and raised expectations about the Christmas period.

“I urge Londoners to follow the new restrictions very closely, so that we can protect our NHS and prevent more tragic deaths. “It would be such a tragedy to lose even more people to this disease when the vaccine is now being rolled out across our city and those lives could be saved.”