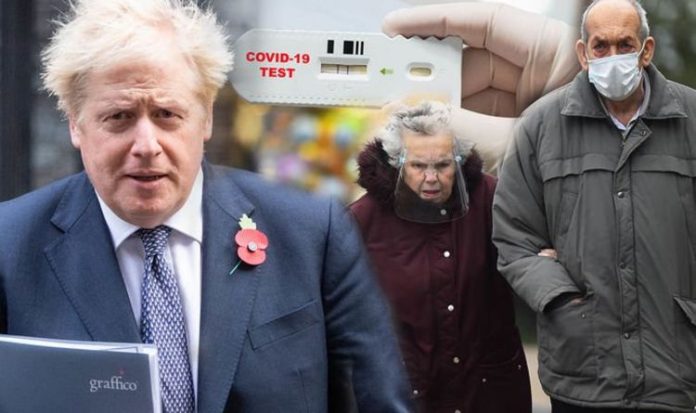 England is currently in its second coronavirus lockdown, which bans people from leaving their homes except in ‘essential journeys. Pubs, bars, restaurants and non-essential shops have been told to shut their doors once again and international travel has been banned. Elsewhere in the UK, Scotland has launched a new four-tier system, while Wales has just come out of its firebreak lockdown. In Northern Ireland, the “circuit breaker” lockdown in the country will be extended for another two weeks.

It’s a confusing system, and will become more confusing yet as England has its lockdown restrictions lifted on December 2.

That’s not to say anyone living in England will be able to go out as normal from that date, however.

In fact, the country will move back into a three-tier system of regional restrictions, it has been confirmed overnight – and these restrictions will be toughened up.

The Government had initially resisted a national lockdown for England and instead imposed the three tier system, which was in force from October 14 until November 5.

Before the national lockdown, the three tier rules were as follows:

This tier saw t rule of six imposed if meeting either indoors or outdoors.

Pubs and restaurants also had to shut at 10pm in a national curfew.

No household mixing is allowed indoors under this higher tier, while rule of six will continue to apply outdoors.

Pubs and restaurants also need to shut at 10pm.

No household mixing indoors or in some outdoor spaces.

Pubs and bars must serve a “substantial” portion of food to be able to serve alcohol – those not serving meals are closed.

It is understood that the Government’s Scientific Advisory Group for Emergencies (Sage) will say on Monday that the previous tiers were not strong enough.

Sage had advised Mr Johnson and his Government to go into a second national lockdown much earlier, but the Prime Minister had resisted their advice.

However, the Prime Minister will have to be on his guard amid waves of rebellion from his backbenches.

Several Tory MPs are opposed to new restrictions and have already called for Mr Johnson’s resignation over the imposition of a second lockdown.

Currently, it is hoped that restrictions can be gradually reduced in the run-up to spring, but without a fully approved vaccine, it is still unclear how long this pandemic will continue for or how long we’ll be living under such restrictions.