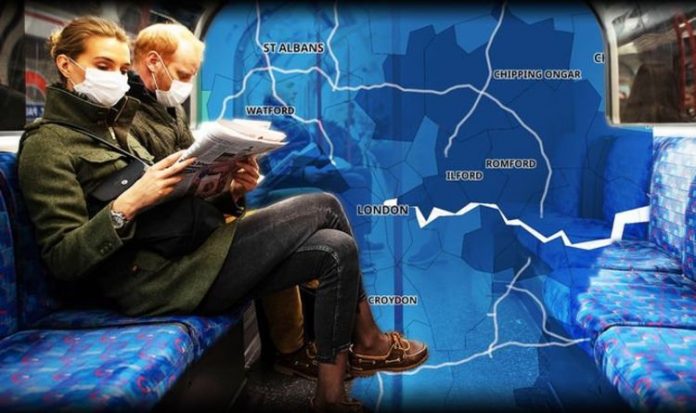 London coronavirus cases are being considered carefully and a decision about which tier London will enter at the end of lockdown will be revealed tomorrow. Prime Minister Boris Johnson announced more than half the country will be put into tougher tiers post-lockdown than before lockdown was announced. Express.co.uk explores which tier London will likely go into after lockdown ends.

Prime Minister Boris Johnson revealed his blueprint for the UK’s response to the coronavirus pandemic this week.

In addition, the following changes were announced:

All non-essential retail will be allowed to open in a bid to boost Christmas shopping, especially on the high street

The 10pm curfew for pubs and restaurants will be scrapped

A mass testing programme will be launched in tier 3 areas.

Since the outbreak began, there have been 149,270 coronavirus cases in London.

The rate of coronavirus is falling across London with 18 boroughs seeing a decline in cases according to official figures.

But despite this, ministers have thus far rejected calls for a borough-by-borough tier level system which MPs are advocating given the wide variations across the capital.

The following boroughs have reported a decline in new cases in the week to November 19 compared to the week before:

London was in Tier 2 before the second national lockdown was imposed.

Tier 2 areas are those of high risk and the following rules are put in force:

He added closing “London’s unique ecosystem of bars, restaurants, clubs and cultural venues” throughout Christmas would be “a hammer blow”.

Felicity Buchan, the Tory MP for Kensington, told Matt Hancock in the Commons that London needs to avoid going in tier 3.

She said: “London is the engine of this country’s economy and my central London constituency is suffering hard”.

Ms Buchan added that as of November 20 “London has a substantially lower case rate than the English average, coming in at 75 points lower, and my constituency was 125 points lower”.